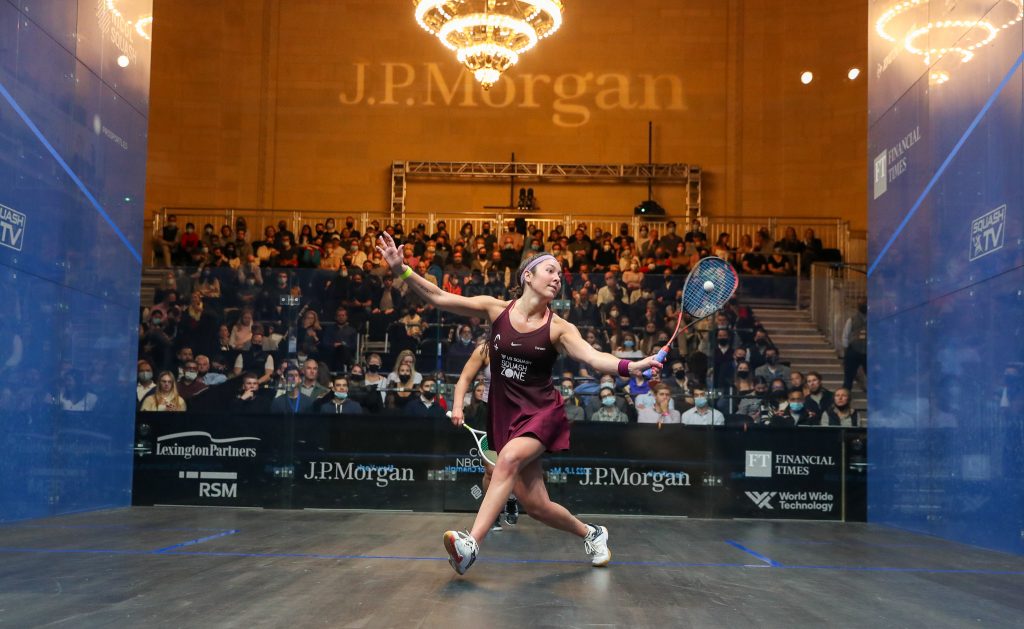 Amanda Sobhy came back from 2-1 down against Salma Hany

Both women’s semifinals proved to be difficult for the top two seeds Gohar and Sobhy. Gohar, the world No. 1, hadn’t been on court for more than an hour to reach the final, and found herself on court for nearly an hour against first-time semifinalist Olivia Fiechter. Gohar earned a 2-0 lead, but backed by the home crowd, Fiechter took the first game off Gohar all tournament in the third.  The Terminator then regained her composure to reach her first career ToC final in 11-6, 11-6, 7-11, 11-5 in fifty-one minutes.

“I’m very happy to be in the final, for sure,” Gohar said. “I haven’t been in the final of TOC before, I’m very happy but I’m far from done. The crowd helped her a little bit, playing in front of an energetic crowd who is on your side takes your game up at least ten times, not taking anything away from her, she played well, she’s gaining more confidence and I think she’s realizing she can beat players in the top ten now and having that belief helps a lot.”

Bidding to reach her second career ToC final since her run in 2016, Sobhy found herself in danger of a semifinal exit against world No. 7 Salma Hany, who fired her way to a 2-1 lead including a marathon 15-13 third game. Following a dive and injury break between games, Hany let her foot off the pedal in the fourth as Sobhy sped to an 11-0 lead. Hany regrouped in the fifth, which went back and forth until Sobhy pulled away from 9-all to win in sixty-six minutes.

“I think she does really well when the momentum is broken up, every time she went to the towel she won the next point,” Sobhy said. “I’m not used to opponents taking injury breaks so I just tie to keep my composure and stay pumped up and keep the momentum going but she came back really strong, I told myself to chase every ball and if you’re going to go out then go out on your terms and just relax and play.”

Sobhy beat Gohar in the 2016 semifinals, but hasn’t defeated the Egyptian since 2019 and lost their last four encounters.

“I’m just going to go and rest and recover and talk to my coach about a game plan for tomorrow and I played her in the British and got smoked pretty badly so I don’t think I could do much worse but I’m just looking forward to redeeming myself and playing in front of a packed house,” Sobhy added. 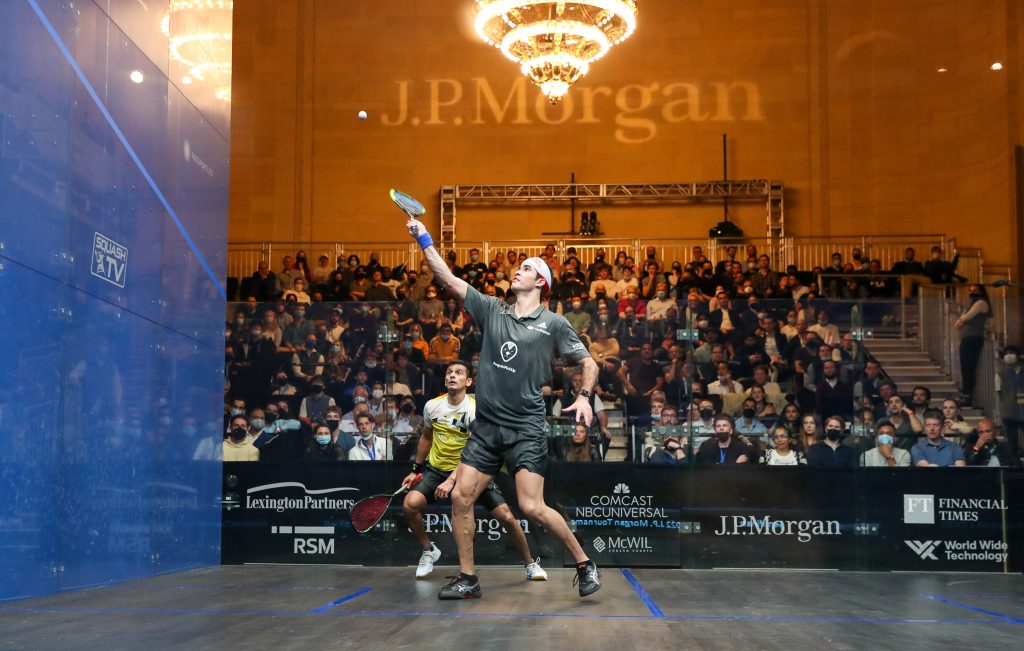 Diego Elias held off a five-game challenge from Saurav Ghosal

Farag enjoyed the smoothest road to the final, maintaining his perfect record with an 11-5, 11-4, 11-4 in under half an hour over compatriot and four seed Mazen Hesham. The 2019 ToC champion will vie for his second title in just his second career final in Vanderbilt Hall.

“Every time you introduce the tournament, it gives me goosebumps with how prestigious the tournament is, the history it has, the players that have lifted this trophy,” Farag said. “John Nimick and his team have been doing such a great job and look at this crowd, what’s not to love, we dont get these vibes everywhere we go so you need to appreciate it every time you’re on this court.”

The semifinal session ended with a five-game tussle between Elias and India’s Saurav Ghosal with the world No. 5 from Peru emerging victorious after seventy minutes.

“Saurav is playing amazing this week, I think he was struggling with an injury a couple of months ago, but now he is back at his best, he is always tough to play and I am just very happy to be through,” the Peruvian said. “It was very tough physically. Every time you play Saurav, he is very fit and it is always long rallies. I am just happy I could keep running and keep pushing, and I am just happy to be in the final.”

Farag holds a 14-2 head-to-head record against the Peruvian, whose last win came 2017.

“I watched a little bit [of Ali Farag’s win over Mazen Hesham],” Elias said. “He is looking great, we always play great matches, so I need to recover and get ready for tomorrow!”