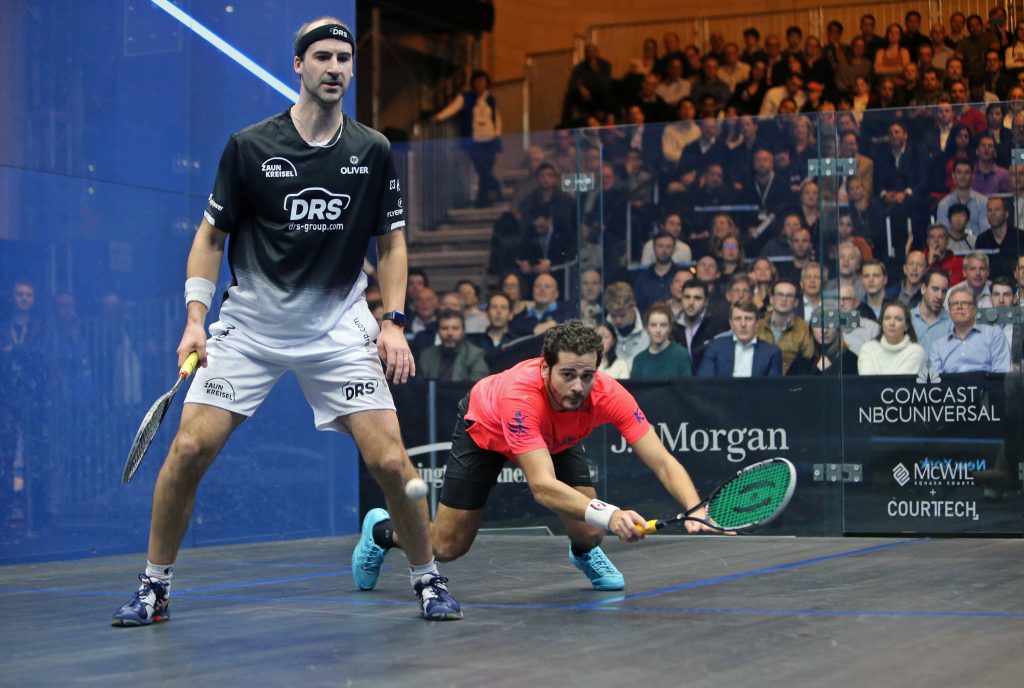 The two men’s quarterfinals were contrasting in both duration and parity as Gawad ground out a ninety-minute marathon against 2018 ToC champion Simon Rösner—a rematch of the 2017 and 2019 quarterfinals—and ElShorbagy swiftly ended Joel Makin’s promising run in three games.

The ninety-minute match between Gawad and Rösner was elongated with dozens of referee decisions and video reviews as the two players continually tangled in addition to the grueling extended rallies.  As he has throughout the tournament and career, Gawad made a slow start to his match dropping the first game 11-6 against an in-tune Rosner. After Gawad took the second, Rosner enjoyed a momentum shift in the third, holding off a comeback with a double bounce video review to hand him game ball at 11-9. In both the fourth and fifth games the German held slender leads, which Gawad cut down with his shot-making and forcing errors from the world No. 7. The Egyptian came back from 9-7 down in the fifth to win 6-11, 11-8, 9-11, 11-8, 11-9.

“I’m really happy to be through,” Gawad said. “Simon played really great squash today. He hit amazing winners from all corners today, I was under pressure for the whole match, and I really wanted to push and win today to reach the semifinals. I’m glad I did and I’m glad I’m in the semifinals and get to play in front of such a great crowd.”

The second men’s quarterfinal staged a highly anticipated match between world No. 2 ElShorbagy and Joel Makin, who is widely considered a future top five player and made one of the more impressive runs of the 2020 ToC. The ‘Beast of Alexandria’ slammed the door shut on any potential upset, however, demonstrating his power and drive for a third ToC title with an 11-6, 11-6, 11-6 victory after fifty-one minutes.

“Joel, for me, is the most improved player every year,” ElShorbagy said. “Every match he plays there is something new that he brings to his game and for me he is a top five player. He is one of the most hungry players that I have come across in my career. He’s actually the first training partner I’ve had, beside my brother, in my career. We get on really well and he has had a fantastic tournament.” 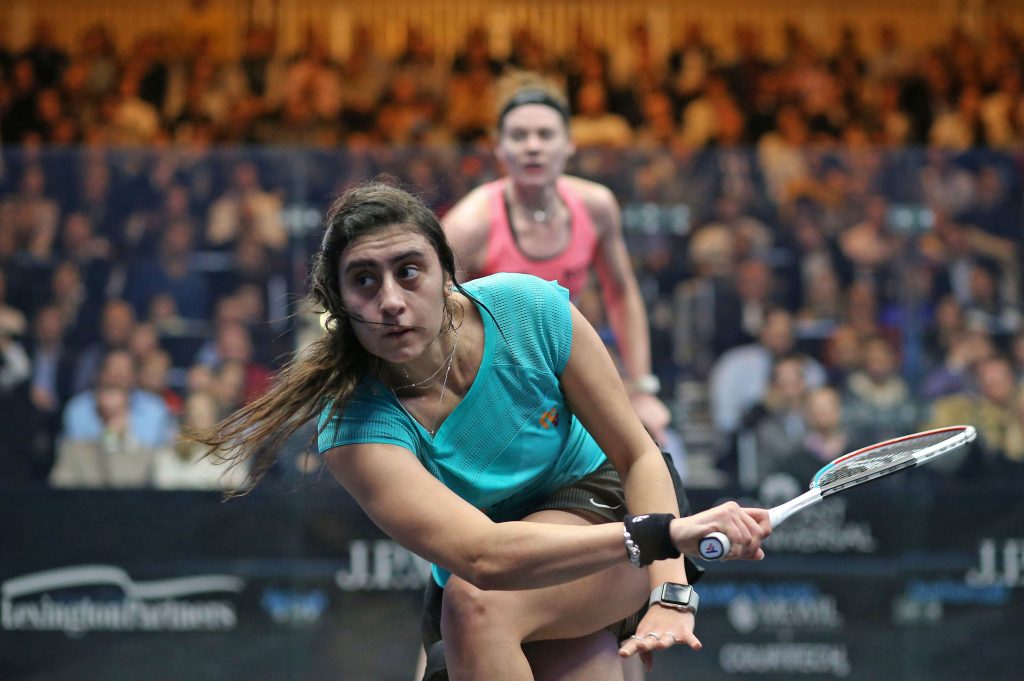 The two women’s quarterfinals shared a similar narrative as both players put four-game third round performances behind them on Tuesday, returning sharper and more disciplined Wednesday night to record three game victories.

“It just feels really good to be on court and playing close to back to my best,” King said. “I just want to keep playing and what better way than to keep playing here in Grand Central, it’s one of the most amazing events in the whole world.”

King will need to record her first PSA win against world No. 2 Nour El Sherbini since 2012 in order to make her ToC final debut. The reigning world champion similarly ended a three-match losing streak against England’s world No. 8, learning from her past losses and changing tactics to win 11-7, 11-3, 11-8 in thirty-three minutes.

“Losing once against any player is always hard, but losing three times is harder,” El Sherbini (above) said. “Last season I wasn’t happy with the way I was playing and I played her three times and I lost three times. This time I was prepared well and I just wanted to come on and play good, enjoy more and I think I did a good plan with my coaches. I’m really glad it worked and happy that I won in three. SJ is very skillful and you can see that she can kill any shot from anywhere on the court. I was trying to take a step forward and be prepared for any shot she played and I’m happy that I’m playing loads better than yesterday and that gives me a huge push for tomorrow.”