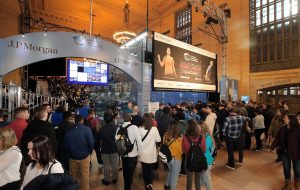 Egypt’s world No. 1’s Ali Farag and Nour El Sherbini lead the 2022 J.P. Morgan Tournament of Champions field in search of their second and fourth ToC title, respectively, as the world’s top players prepare to compete in New York City’s Grand Central Terminal, January 13-21.Twenty-six nations will be represented in the two PSA Platinum draws, which have attracted forty-six of the world’s top fifty-ranked men and forty-five of the top fifty-ranked women.

Farag and El Sherbini, the 2019 ToC champions, will be aiming to reclaim their ToC titles after falling short in 2020. Mohamed ElShorbagy will defend his title as the tournament’s three seed and with his sights set on joining Jonathan Power as just the second four-time men’s champion in the softball era. France’s Camille Serme returns from a four-month injury layoff to defend her title and aim to equal El Sherbini’s record of three women’s titles.

Team USA will have three top fifteen-ranked players enter the ToC women’s draw for the first time. 2016 finalist Amanda Sobhy will hope to go one step further in front of the home crowd with her highest seeding yet at world No. 3. World No. 11 Olivia Blatchford Clyne and world No. 13 Olivia Fiechter both enter the ToC with career high rankings and are joined by U.S. teammates Sabrina Sobhy and Haley Mendez.

Nicole Bunyan, a New York City-based teaching professional and Canadian international, will occupy one of the two women’s wild card positions, and will be joined by the winner of a two-player wild card playoff set to take place January 12.

New Zealand’s Paul Coll will open his sixth ToC campaign with a career high ranking of world No. 2, and will hope to advance past the quarterfinal stage for the first time. Former champions Karim Abdel Gawad and thirty-eight-year-old James Willstrop will hope to emulate their past success in Grand Central ranked world No. 10 and 22, respectively.

Queens, New York-native Chris Gordon will make his seventeenth tournament appearance as a wild card, while Williams College graduate Jamie Ruggiero is set for his debut as the second men’s wild card.

Draws will be released on Wednesday, December 15. For tickets and more information visit tocsquash.com/tickets.