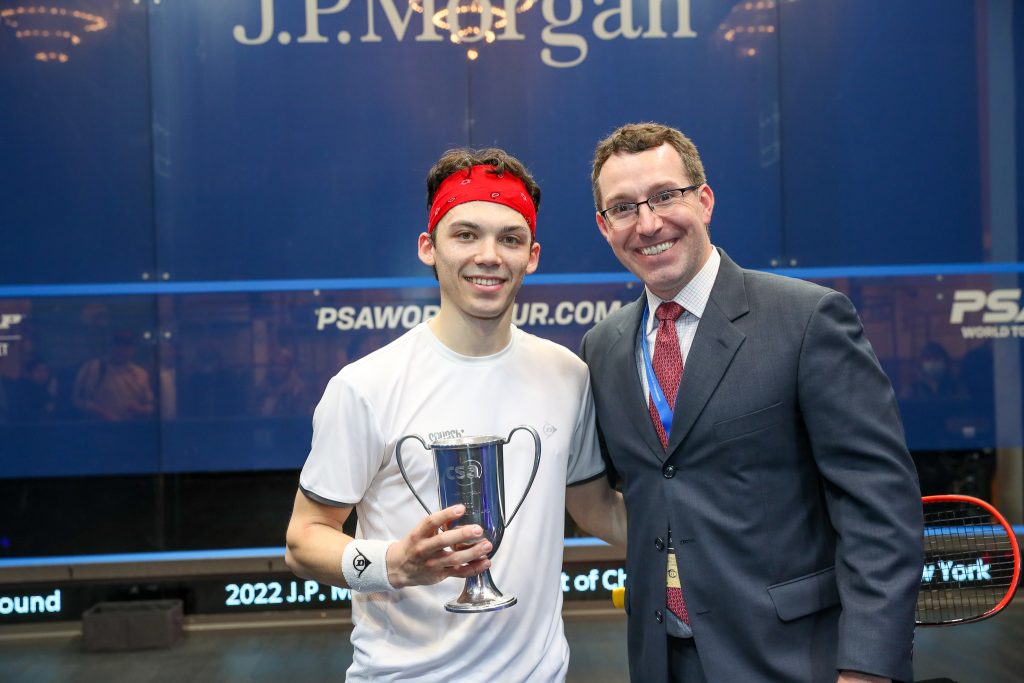 Harvard’s Crouin and Cornell’s Subramaniam—the 2022 Intercollegiate individual national champions—booked their place in the ToC second round during the afternoon session.

What began as a close contest between the world No. 23 Frenchman and England’s Nathan Lake ended in unfortunate fashion as the Chicago-based Lake was forced to retire with the game score at one-all due to a back injury. Following the match, Crouin was presented with the Skillman Award—College Squash’s highest top honor bestowed each year to a senior men’s squash student-athlete who has displayed exemplary sportsmanship and skill during his career.

“When I came to Harvard, I didn’t know what to expect in terms of professional squash,” he said. “I took a gap year after high school to play professionally and I really enjoyed it. I came to Harvard with the goal of graduating and turning pro afterwards. My goal was to stay in the top 100 during the four years, and I continued to go up, so I decided to keep balancing my academics and squash. I was playing on the professional tour and I was also really excited to play the college season from November-March. I spent three years at Harvard because of COVID and those three years have definitely transformed me in many ways. I’m going to look back in 10, 20, 30 years and I’ll be really grateful to have had this opportunity to go there [to Harvard].”

Crouin will face a difficult second round with his first career match up against 2017 ToC champion Karim Abdel Gawad. 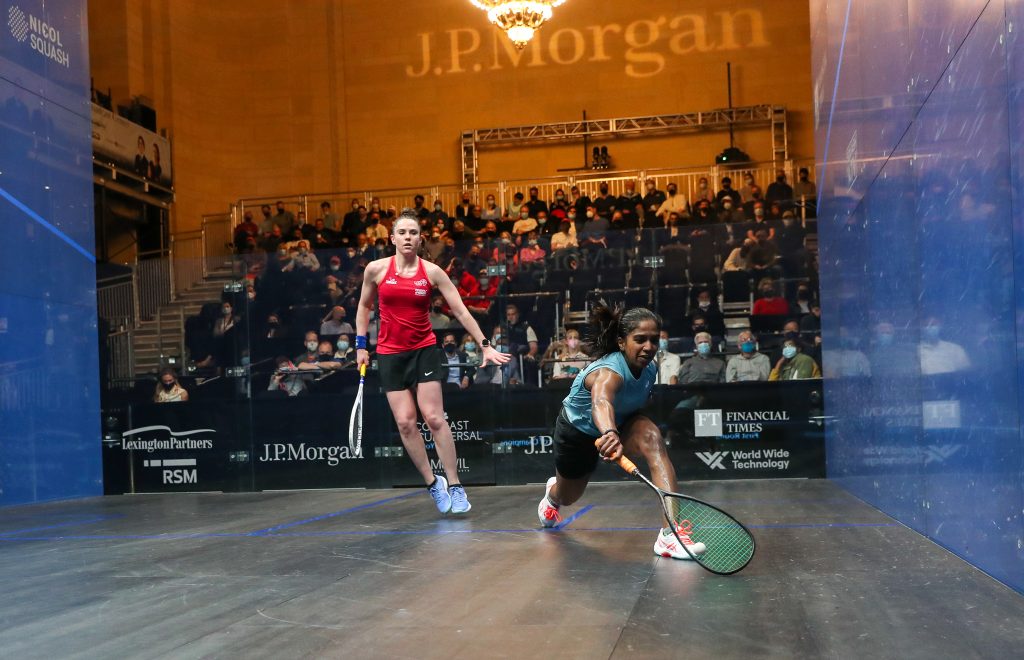 Sivasangari, who reached a career high world No. 20 this month, followed on in the afternoon against Enora Villard. The Malaysian followed up her 3-0 British Open win with another clinical three-game victory against the French international.

“I feel relieved,” said Subramaniam, who will take on USA No.2 Olivia Fiechter next. “Enora played really well today. I played her a month ago at the British Open and it was definitely harder this time. The court is really different too and I’m just really happy to get through. I just made a couple of easy errors in the middle of the game, so I needed to refocus and get my length to the back. I think I did really well to come back and finish it in three. [To the crowd] Thank you so much for making this happen. I see a few Cornell supporters, it’s a really nice venue and I’m looking forward to my next match.”

Subramaniam will set up an Ivy league match against Princeton graduate and world No. 10 Olivia Fiechter in the second round. Elsewhere in the women’s draw, Penn grad Melissa Alves recorded her first career ToC win against Australian veteran Donna Lobban in three games.

Making his debut in Grand Central, Ibrahim, Princeton’s 2022 national intercollegiate individual finalist, joined Crouin and Subramaniam in the second round in the evening session with a commanding win over Switzerland’s formidable Dimitri Steinmann in three games. The Egyptian faces the unusual circumstance of facing the Swiss international again in the second round, after Steinmann was drawn as the Lucky Loser in place of two seed Mostafa Asal, who was forced to withdraw from the tournament due to a positive COVID test.

“It’s a pretty busy week because I have finals, but I’m happy to play here and distract my mind with something else,” said the world No. 12 following the match. “What better venue to play than Grand Central, it’s my first time playing on the show court and it’s a pleasure. Three years ago, I was a freshman, and it seems like an age ago. The crowd is busy from the first day and it inspires you to play better and better. I’m happy to win so I get to play here one more time. I will try to study a little bit tonight and tomorrow and will hopefully try to play a little bit on the glass court too.” 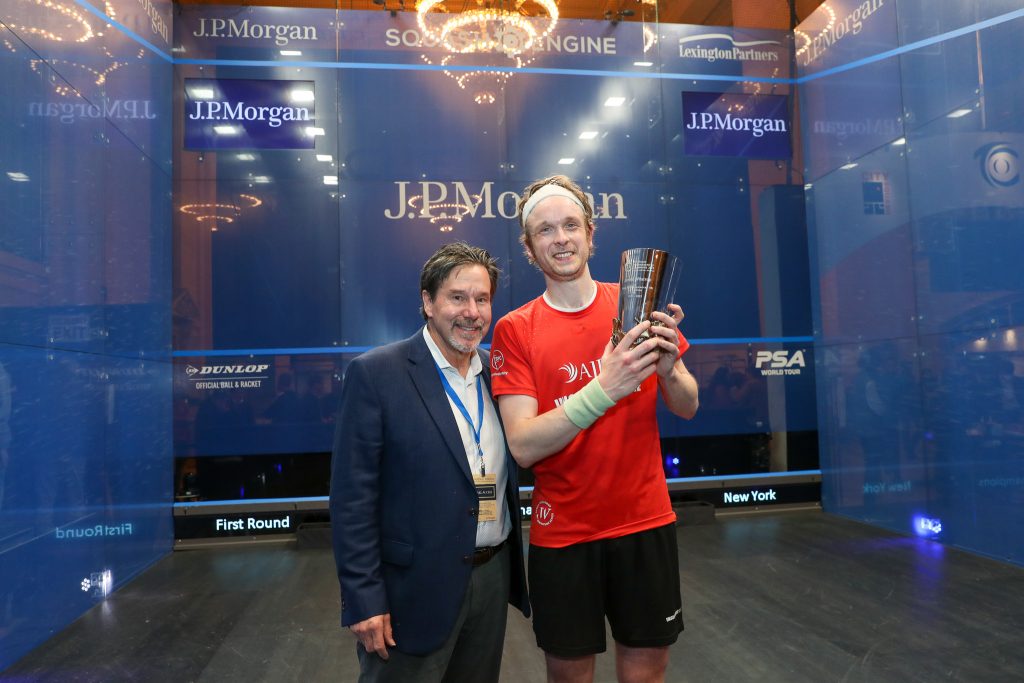 The final match of the day showcased ToC history as 2010 champion James Willstrop made a record eighteenth ToC appearance in Grand Central. The thirty-eight-year-old began his campaign against Scotland’s Greg Lobban just days after both players competed in the European Team Championships. The Scotsman endured a long road to Grand Central, only making it to New York City hours before his match time, yet showed no signs of travel fatigue as he pushed the English veteran in an entertaining four games, but falling short in the end.

“I’ve had some incredible experiences here and some of the best of my career,” said Willstrop afterwards,” Willstrop said. “When I think of not being here each year, it’s pretty upsetting to me, so I don’t know how I’m going to cope. It just shows the regard in which the players hold this event, we’ve all flown over from Eindhoven [after the European Team Championships]. Greg’s done an amazing thing today having to fly and then play, I don’t know how he’s done that and he played so well, it was an incredible effort.”

“The one thing with age is that you get to know a squash court better every week and every month. You start slowing down, probably, but you start to understand the strategies. I’m doing a bit of coaching now, so I’m having to think about other people for once in my life, which is an interesting situation. You know the squash court, you’ve been on it so many times, which helps a little bit. I love playing. It’s truly an incredible venue, there’s nothing like it playing here, and the atmosphere was unbelievable tonight, it’s such a thrill.”

Willstrop’s next opponant will be world No. 2 and top seed Ali Farag, who will face off Wednesday evening at 7pm.

For all results and more information visit tocsquash.com.