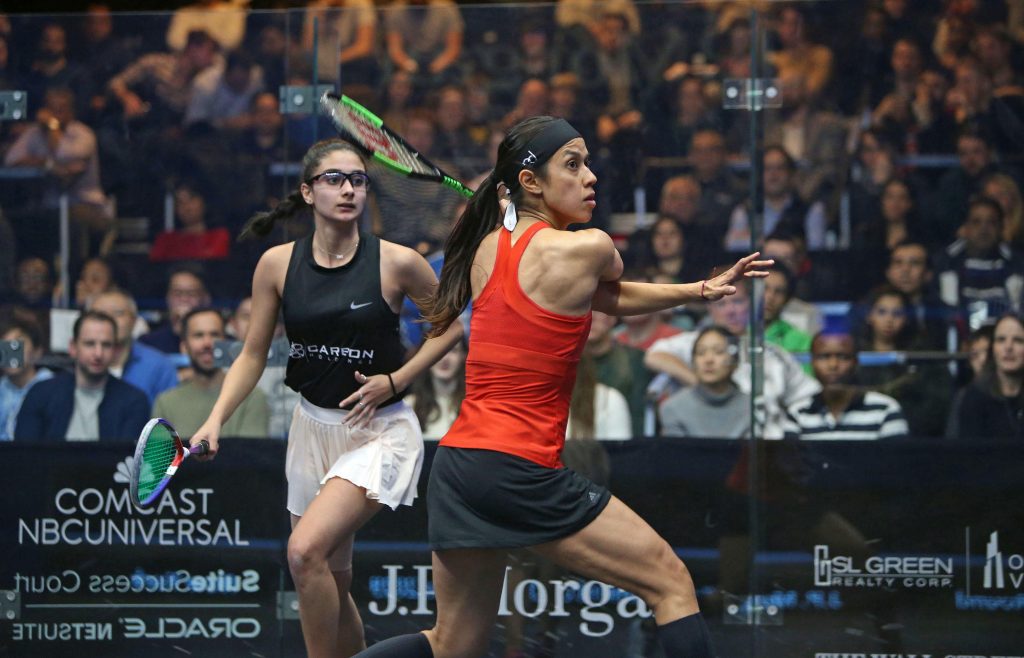 The fourth day of the 2019 J.P. Morgan Tournament of Champions saw all seeds and higher-ranked players assert their dominance by advancing through the first half of the women’s second round and men’s round of sixteen Saturday, January 19, at the Harvard Club and Grand Central Terminal in New York City.

Saturday saw the women take to the Oracle NetSuite SuiteSuccess Court in Vanderbilt Hall as three out of five of the tournament’s top seed moved on to the round of sixteen.

2017 ToC champion and five seed Camille Serme opened up her 2019 campaign with a clinical three-game win over Holland’s Milou van der Heijden to set up a round of sixteen clash against England’s Victoria Lust.

“When I came on the court for the warm-up, I was like a child,” Serme said. “I was excited and happy to be back here. I love playing in Grand Central station, it’s my favorite tournament and I just want to keep playing here.”

“I haven’t played her before and I haven’t really seen her play, but I knew she was a World Junior Champion and that she is a fighter,” David said. “She was really gusty out there. 18 years old, that was when I started on tour, she wasn’t even born yet. It is really a thrill to be here in Grand Central, with equal prize money. It is an amazing event and we really are thrilled to be here.”

David, King or Serme could face world No. 1 Raneem El Welily in the draw’s top half semifinal.

“Watching Joelle before, she was saying that the experience takes over and I knew if I put my gameplay together a little bit better just to put the pressure on, it might falter,” David said. “I was just keeping to my game plan and keeping focused and I was really pleased with my match today. I think it is going to be a great match. I am really excited to play Joelle. We have good battles and it is going to be fun.”

The day’s only five-gamer came on the men’s side in an all Egyptian showdown between 2017 ToC champion Karim Abdel Gawad and Fares Dessouky, who just returned to the tour after a lengthy injury hiatus. Gawad, the eight seed, pulled out the eighty-six-minute encounter 8-11, 11-7, 11-7, 10-12, 11-4.

“He had ACL surgery in September and now he’s coming back really strong,” Gawad said afterwards. “He’s always been a very good player, but now he’s even better. He’s a fighter on court and I have a lot of respect for him. He didn’t come back too quickly, he came back when he was ready to be on court. When we’re out for a month or two, we struggle. Last season, I was on court and playing but I wasn’t doing really well. To come back after ACL surgery and to play such good squash in this tournament and the one before is unbelievable.”

Gawad advanced to the round of sixteen due to an ankle injury sustained by Joel Makin, who was two games up against the Egyptian at the time of the injury.

“In the last match, I felt like I wasn’t ready to be in this tournament and I felt like I wasn’t feeling the ball on the racket,” Gawad said. “I was moving badly, I was playing bad squash, but I think that [the injury to Makin] gave me another life. It made me feel like I’m playing another tournament and it’s another first round here at the ToC. I’m really happy with my performance against Fares, we always play really tough matches.”

Peru’s Diego Elias is through to his first career ToC quarterfinal in his fifth tournament appearane after an entertaining four-game victory over Australian veteran Cameron Pilley.

“He’s playing better every tournament after his injury and I knew it was going to be a tough match because he won both of his matches 3-0, so he was really fresh,” Elias said. “I was trying to make the rallies longer. Sometimes, I was going too much to the front, but it wasn’t working, so at the end I had to play some longer rallies. He’s been at the top of the game for so long and I’ve always admired him. It’s a pleasure playing with him, I was trying to enjoy every point and I was having fun with him.”

Elias will face world No. 1 Mohamed ElShorbagy in his quarterfinal after the two-time ToC champion took out compatriot Zahed Mohamed.

Sunday will see the men’s quarterfinals and women’s round of sixteen lineups completed with match play set to start from noon local time.