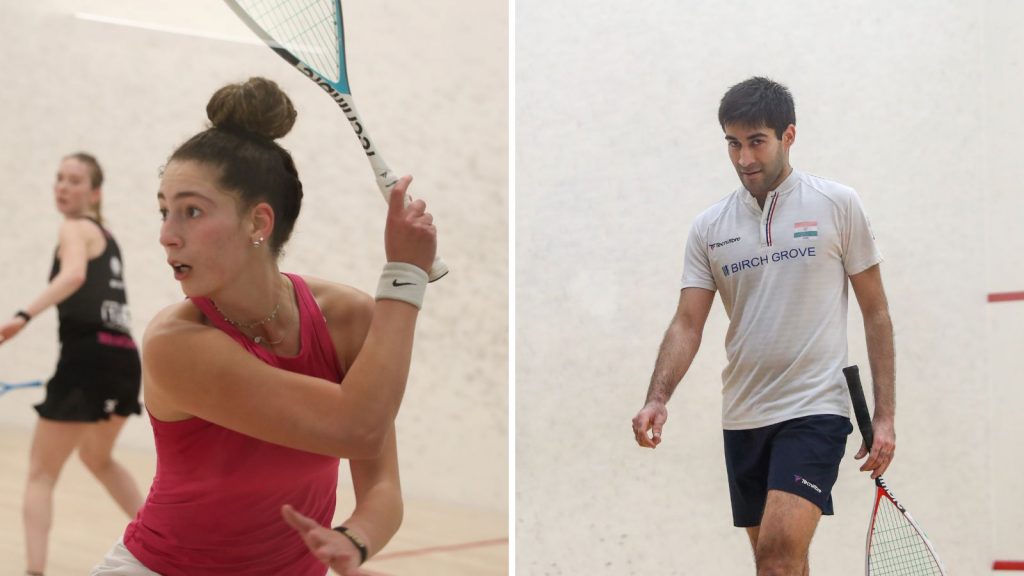 Columbia graduate Ramit Tandon and Harvard graduate Hana Moataz will make their debuts in the J.P. Morgan Tournament of Champions second round after pulling off five-game comebacks against higher-ranked opponents Wednesday, January 18, in New York City.

The first round of ToC matches took place at the New York Athletic Club, River Club, Nicol Squash and Harvard Club with Tandon and Moataz providing the two most dramatic results.

Tandon, world No. 40, opened his sixth ToC appearance on the back foot at Nicol Squash, finding himself down 8-11, 15-17 against Germany’s world No. 20 Raphael Kandra. The Indian international then came back to earn his first ToC main draw victory 11-7, 11-6, 11-7 after seventy-one minutes.

“I just kept fighting. It comes down to the basics,” Tandon said. “Growing up, people just tell you, to fight to the last point and that’s a little tricky because most of the time when you’re down and out, you don’t really come back. So to believe in that and to keep fighting, it’s something I’m really proud of today.”

The former All-American will take on Egypt’s world No. 30 Mohamed Elsherbini Friday at the Nicol Club for a chance to reach the glass court in Grand Central.

“New York is like my second home,” Tandon said. “I have a lot of friends here, friends like family here. The community of friends, former colleagues in New York, it’s always great to see them. I’m always happy here.”

In May, the College Squash Association recognized Harvard’s Hana Moataz with the Betty Richey Award for her exemplary play and sportsmanship throughout her college career on the glass court in Grand Central. The Egyptian is one step closer to playing on the same court following just her second career Platinum victory—a gritty 8-11, 11-13, 11-8, 11-7, 11-4 comeback against England’s world No. 31 Lucy Turmel.

Thursday will field the first half of the second round with the tournament’s top seeds making their first appearances, and glass court play in Vanderbilt Hall commencing at 12pm noon.