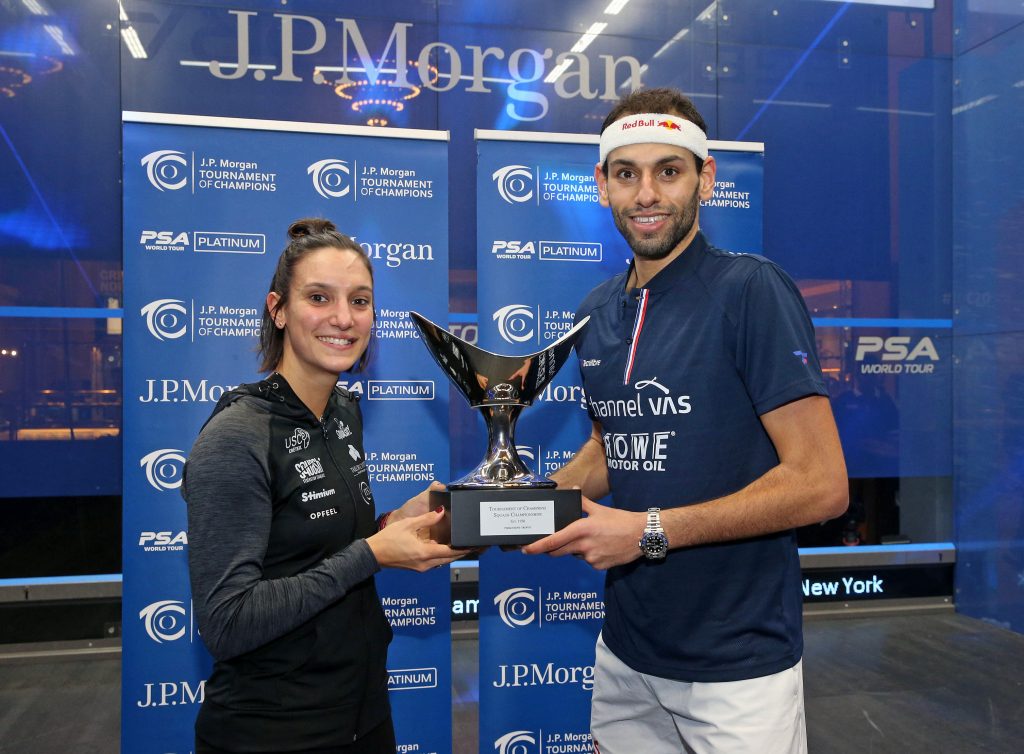 [Above: Camille Serme and Mohamed ElShorbagy]

Serme, the world No. 5, capped off a stellar title run with her third top-three-ranked upset of the week against three-time ToC champion Nour El Sherbini. The defending champion had a slow start match and showed signs of discomfort in her knee during the first game, which Serme took 11-8. Serme continued to press her attack in the second, forcing her opponent around the court to take the second 11-6, after which El Sherbini called for a self-inflicted three-minute injury timeout.

El Sherbini returned to court and was able to shoot winners to stay within reach of Serme, but the Frenchwoman pulled away to clinch the title 11-7 in the third after forty minutes.

“I know Nour was not 100%,” Serme said. “I think everyone could see it. She was not moving very well on court but it’s not easy to play someone you know is not 100%. I was just trying to not think about it, but it’s not easy and all credit to her.”

Serme defeated five Egyptians on her way to the title—three of which extended to five games—including nineteen-year-old Rowan Elaraby, Yathreb Adel, world No. 1 Raneem El Welily and world No. 3 Nouran Gohar leading into the final.

“All the titles are special and different, but this one is special because the last tournament I lost in the quarter final of the World Championship against a very strong Hania El Hammamy and that was a tough one,” Serme said. “Obviously, the World Championship is the one that everyone wants to win and that’s my biggest dream, so I’ll take that one today. If I could have all of my team at every tournament then I would do it. It’s so nice and so important to me to have them with me. To prepare all those matches, to analyze every match, usually we analyse when I lose but this week we have been analyzing when I have won, so it was very interesting. I wish they could come every time.”

Another ToC title record was augmented in the form of ElShorbagy, the world No. 2, in the ensuing men’s final. The ‘Beast of Alexandria’ had been in blistering form all tournament, reaching the final without dropping a game. The world No. 3, meanwhile, was also in strong form including a major five-game semifinal upset over world No. 1 Ali Farag Thursday night.

Momen edged a close first game 11-9, which turned out the be ElShobagy’s only lost game of the tournament. ElShorbagy then returned to the clinical form he had been in all week, powering to the title 9-11, 11-7, 11-7, 11-5 after seventy-six minutes.

With the final victory and Farag’s semifinal exit, ElShorbagy will now return to the world No. 1 ranking next month for the first time since February 2019. Following up his 2015 and 2016 ToC triumphs, ElShorbagy joins an elite club of three-time ToC champions in the softball era including Amr Shabana, Ramy Ashour, Peter Nicol and Jonathan Power.

“To win the trophy for the third time is an honour,” ElShorbagy said. “To have your name beside all the great champions that have won the event, it’s the kind of moment that I live for. I said before the season started that my main goal was to get back to World No.1 and to achieve this on the same court that I lost the World No.1 last year is a great feeling. There is no better venue than here that I would have wanted it to happen and I’m really proud.”

The ToC—retitled in 1992 and the sport’s longest continuous pro tournament since 1999—thus ends its twenty-third year of the state-of-the-art all-glass Squash Engine show court staged in Grand Central’s Vanderbilt Hall. In addition to record attendance, Hundreds of thousands of passersby had a chance to witness the sport at its highest level on their commute through Grand Central with the tournament’s unique free front wall viewing.