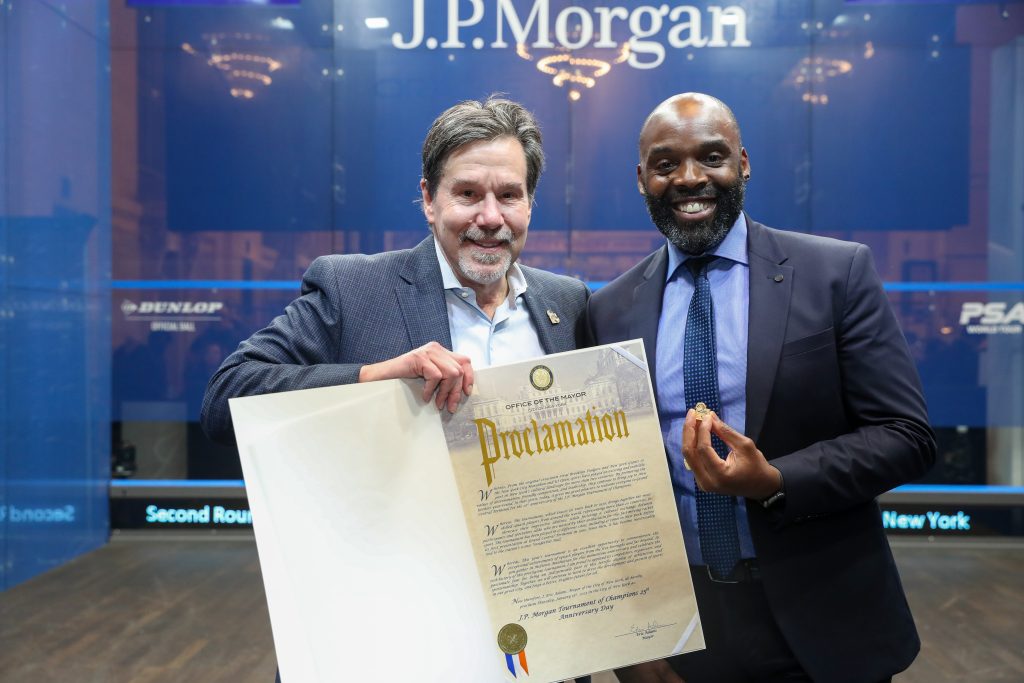 Whereas, From the original crosstown rival Brooklyn Dodgers and New York Giants to the New York City Marathon and U.S. Open, sports have played an exciting and indelible part in New York City’s cultural landscape for more than two centuries.  By promoting the values of determination, friendly competition, and leadership, they continue to bring joy to New Yorkers year-round. In that spirit, today, it gives me great pleasure to welcome everyone to Grand Central Terminal for the 25th anniversary of the J.P. Morgan Tournament of Champions.

Whereas, The tournament, which traces its roots back to 1930, brings together the most skilled squash players from around the world, representing more than 20 countries, to showcase their impressive abilities, while fostering a cultural exchange between participants and spectators alike, who are united by their enthusiasm for this fast-moving racket sport. The tournament has been played in 17 different cities, including 37 times in New York, before its first presentation at Grand Central in 1995. Since then, it has become inextricably tied to the station’s iconic Vanderbilt Hall.

Whereas, This year’s tournament is an excellent opportunity to commemorate the exceptional achievements of squash players from the five boroughs and far beyond. As you gather in Midtown Manhattan for this momentous anniversary and celebrate the rich history of this prestigious tournament, I am proud to applaud its competitors, organizers, and passionate fans for being an indispensible part of this terrific display of athleticism and sportsmanship. Together, we will continue to work to drive the development and growth of sports in our great city, and forge a better, brighter future for all.

Now therefore, I, Eric Adams, Mayor of the city of New York, do hereby proclaim Thursday, January 194, 2023 in the City of New York as: