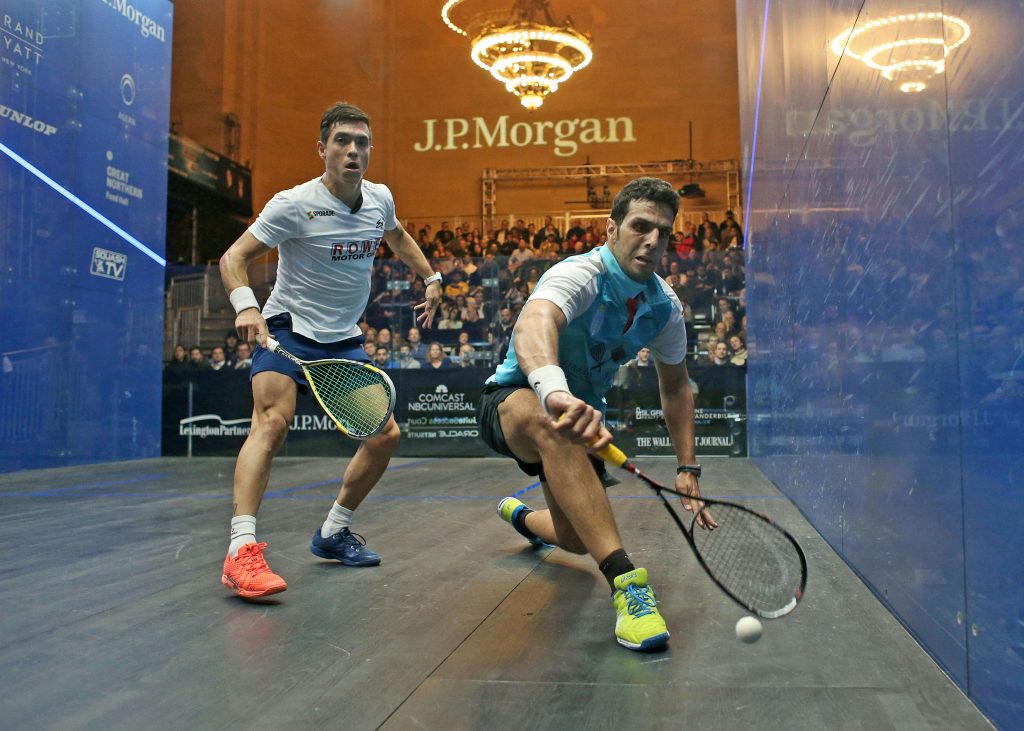 The day’s biggest upset of the day saw Mosaad, world No. 17, send world No. 6 Miguel Rodriguez to an early exit to follow up his win at the Black Ball Open last month.

Colombia’s Rodriguez started well in New York to go a game ahead, however a crucial second game went the way of Mosaad on the tie-break, and the Egyptian played some scintillating squash in the third and fourth games to consign Rodriguez to an early exit after eighty-one minutes.

“The second game was very important to me because I was 1-0 down,” Mosaad said. “I needed that game because there is a big difference between 2-0 and 1-1. It is not easy to play Miguel. Especially because we have had a couple of matches that were very tough. I needed to be strong mentally today, and I pushed 100% today. In any sport, players go down and up sometimes, and you need to be focused and you need to be strong. I am really happy to be back again, and I need to play and to push.”

Momen, the 2018 finalist and world No. 4, faced an unlucky draw with an opening match against world No. 10 Mohamed Abouelghar. Momen was forced to dig deep and recover from a 2-1 deficit against his Egyptian teammate to win in five games after sixty-eight minutes.

“I really tried to weather the storm today,” Momen admitted. “As exceptional as Mohamed is, having to play him every single tournament is just so tough mentally. With a player like him, he studies you, and he plays better every time, and every time, I wonder, will it be this time? I try and fight hard, and I try my best not to lose. I kept pushing and I kept fighting and I am so happy that I got the win because he was brilliant today.”

Friday saw the women’s first round kick off at the Harvard Club, Princeton Club and New York Athletic Club.

Team USA’s Marina Stefanoni proved to be a formidable challenge for world No. 33 Zeina Mickawy in her second straight ToC wild card appearance. The sixteen-year-old stayed within reach of the Egyptian throughout the entire match, winning the second game, and squandering game balls in the fourth game, falling 14-12 after forty-six minutes.

“I’m really thrilled that I won this, it was really hard,” said Mickawy, who will play World No.4 Joelle King in the next round on the Oracle NetSuite SuiteSuccess court Saturday. “I just tried to push and it was really tough to play like this with Marina. She’s the younger player, she’s up and coming and she is going to be one of the top players on the PSA. I wasn’t playing that well at her age.”

“Obviously I am disappointed, but I will definitely take a lot of positives from this,” Stefanoni said. “It was great to get this opportunity again from tournament director John Nimick,” said Stefanoni, who became the first American in twelve years to win a British Junior Open title earlier this month. “It was super and I tried to make the most of it. I definitely feel that I am improving and am slowly going to break into the pro level.”

Malaysia has three representatives in the women’s draw as former world No. 5 Low Wee Wern and nineteen-year-old Sivasangari Subramaniam both won to join Nicol David in the second round. Subramaniam, world No. 51, produced the highest-ranked upset of the women’s first round over England’s world No. 26 Fiona Moverley. After dealing with a recurring injury for over twenty-one months, Wee Wern appears to be back close to returning to her top-ten form.

“I’m a bit nervous, I’ve played it before but I didn’t appreciate it when I was in the top 10, I just took it for granted and it was just another match for me,” said Low, who will now take on No.6 seed Nouran Gohar in the next round. “After being out for 21 months, I really missed it and this time around I think I will appreciate it a bit more.”

The women’s second round and first half of the men’s round of sixteen will take to the all glass court in Vanderbilt Hall from noon local time Saturday, January 19.