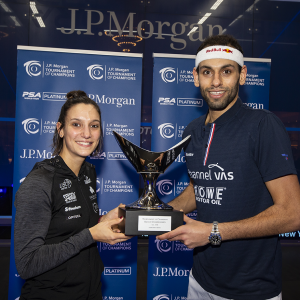 The J.P. Morgan Tournament of Champions returns after a year hiatus due to the pandemic to Vanderbilt Hall at Grand Central Terminal January 13-21, 2022. The world class squash championship originally debuted at the Terminal in 1995, then returned in 1999 after the historic landmark’s majestic renovation and ran consecutively through 2020. The tournament’s roots date to 1930 making the “ToC,” as it is affectionately known, the oldest running professional squash championship in the world.

The men’s and women’s top-ten tournament is a highlight of the PSA World Tour and attracts all of the world’s best players to New York City. The nine-day single elimination competition will feature more than 55 matches on the all glass Squash Engine Show Court set up on the east side of Vanderbilt Hall and surrounded by 425 reserved seats. Egyptian Mohamed ElShorbagy and Frenchwoman Camille Serme are expected to defend their respective 2020 titles.

“The response so far of New York’s extensive and passionate squash community to the return of the ToC has been terrific,” said John Nimick, the longtime tournament promoter of Squash Engine, Inc. “We expect a full stadium for nearly every session, which we know inspires the professionals and results in the best squash of the year. We also know we’ll have challenges this year as we emerge from the pandemic, but we are dedicated to making everyone’s experience at the 2022 ToC safe, secure and enjoyable.”

Dorit Phinizy, Director of Events for Grand Central, added, “We love what the ToC does for the Terminal and we can’t wait to have the tournament back.”

J.P. Morgan serves as Title Sponsor for the 14th consecutive edition of the event, while longstanding sponsors Lexington Partners and NBCUniversal return in support. Global streaming coverage is provided by the PSA Tour’s SquashTV and numerous international linear broadcasters show the semifinals and finals.

The ToC is the only sports championship presented annually at Grand Central Terminal.

Player entries and draws are set to be released in December.