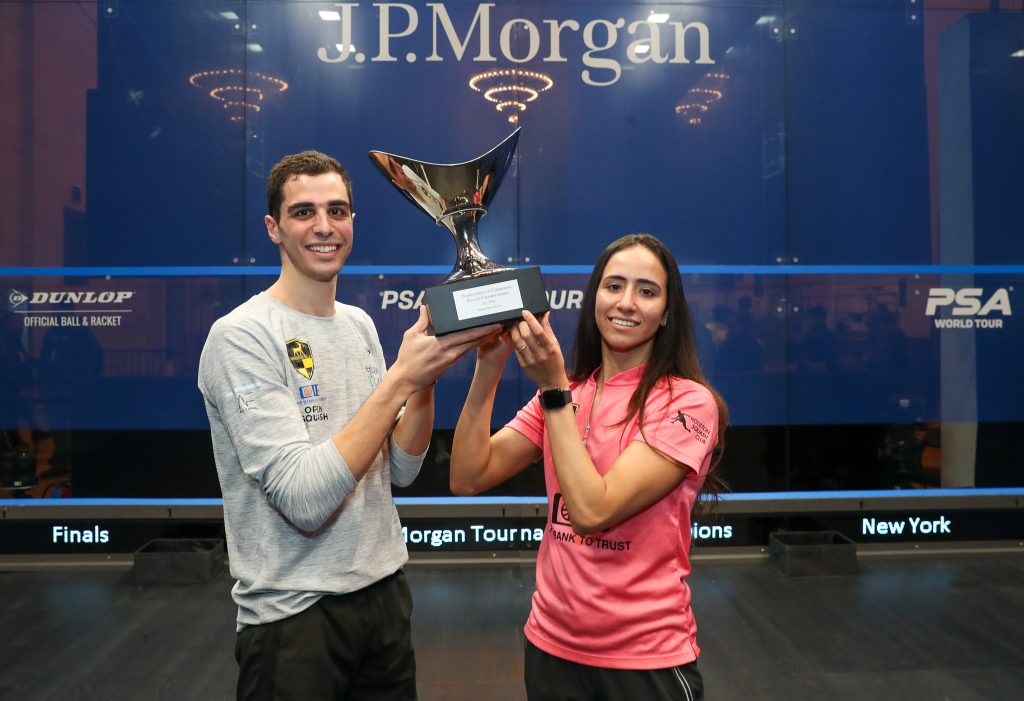 The women’s final between Gohar and American world No. 4 and 2016 ToC semifinalists Amanda Sobhy led off the eighth day of match play in Vanderbilt Hall in a rematch of the 2016 semifinal won by American Amanda Sobhy. Gohar more recently defeated the American in three at the British Open last month, but it was the American who started on the front foot in the first game earning a quick 5-1 lead to the delight of the rousing home crowd.

Gohar quickly recovered in the first winning the next six points, which marked the last time the American would lead for the rest of the match. The two players sparred with intense rallies in the first two games, but Gohar’s commanding form that she displayed all tournament made the different as the twenty-four-year-old clinched her first ToC title 11-7, 11-7, 11-3 in thirty-four minutes.

“It sounds awesome [to be champion], you guys [the crowd] are really fair!” Gohar said. “I thought no-one would clap for me because Amanda is the favorite, but everyone is unbelievable and have been all week, thank you for coming and supporting us. It feels really good to win the title. I’m over the moon, I’ve wanted this title for so long, it’s one of the best venues that you can play at and I really wanted to add my name on a prestigious trophy like this one. I wanted it badly and I thought this year seemed like a good year for me so why not take it.”

Gohar, who recently moved to the U.S., adds the ToC title to her growing list of accolades this season including the Egyptian Open, U.S. Open, Detroit Pro Classic, Cincinnati Cup, Windy City Open, Black Ball Open and Egyptian Nationals. She will lead the PSA World Championships draw as the top seed next week in Cairo.

“Having a big entity like J.P. Morgan sponsoring the event is huge for the sport and I’m very proud of this and proud to be part of such a big event,” Gohar added. “US squash has great female players playing right now and it’s good for our sport. I’ve always loved to play in Egypt because it’s my home, but since I moved here the U.S. has been treating me really well.”

The ensuing men’s final pitted world No. 2 and 2019 ToC champion Farag against first time finalist and world No. 5 Diego Elias. Farag flawlessly reached the final without dropping a game and held a 14-2 head-to-head record over the Peruvian.

The match began with fireworks in the first game that Farag pulled out 16-14 after a blistering twenty-seven minutes. Clearly up for the fight, Elias continued to push in the second and forced the Egyptian to drop his first game all tournament 11-9, which ended with a moment of sportsmanship as Farag acknowledged his double bounce and called off a video review. Farag edged a close third game 11-9, which helped him grind down the Peruvian’s legs before closing out the match 11-5 in the fourth after seventy-six minutes.

“I’m over the moon, the ToC is one of the biggest titles you want to win,” Farag said. “I got to world No.1 on this court [in 2019] for the very first time, so I’ve got nothing but great memories. New York is always a great city to come back to, the vibe, there’s a lot of familiar faces. This crowd is extremely knowledgeable. Diego, we played an incredible match. It was very physical, very technical, required a lot of skill and stamina, I think it had everything in there and it was played in good spirit as well. It wasn’t easy.”

The 2022 ToC marked the twenty-fourth year the tournament was staged in Grand Central in its eighty-seventh year. Before the finals, the ToC honored MetroNorth workers on court for their crucial role in keeping the nation’s most important train station functioning throughout the pandemic, and their integral role in ensuring the success of the ToC every year.

“Thanks to John Nimick [Tournament Director] and his Squash Engine team for the great job they’ve done and the challenges they’ve had to face with omicron and everything,” Farag added. “I have missed it, the ToC is one of the tournaments you really look forward to and this time I’ve got my parents and my aunt watching as well, so I’m really happy to lift this trophy in front of them.”

The J.P. Morgan Tournament of Champions will return in January 2023. Stay tuned for more information on tocsquash.com.