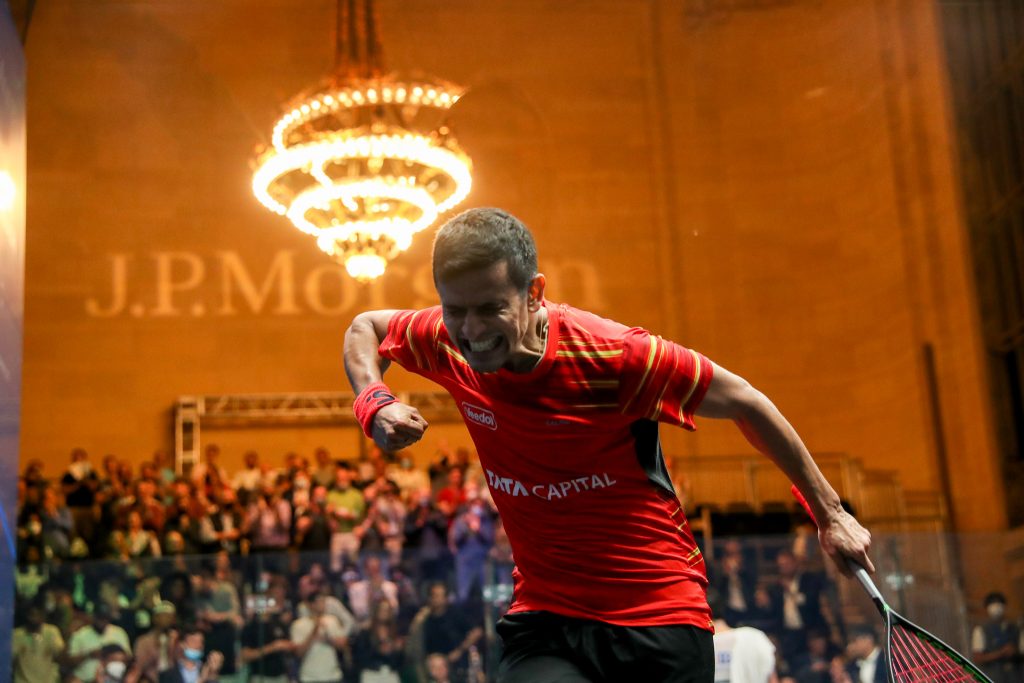 Thursday fielded a full slate of eight quarterfinals that largely played out according to seeding and ranking, save for Fiechter and Ghosal.

For the second day in a row, the American world No. 10 saved a match ball to win in five games, this time coming back from 2-0 down against world No. 8 Elaraby. Fiechter defeated the twenty-one-year-old last month at the British Open in three games and it seemed that revenge was on Elaraby’s mind as she took the first two games 12-10, 11-6.

Fiechter regained her composure in the third and started to force more errors from the Egyptian and frustrated her attacking play as she pushed through the third and fourth games 11-8, 11-8. Fiechter held a 4-1 lead in the fifth, but Elaraby clawed back to earn an 8-6 lead and eventually a match ball up 10-9. With the support of the home crowd behind her, Fiechter saved the match ball and took the next three points and match after sixty-three minutes.

“I knew Rowan would be out for revenge, I got the better of her when we played in the British Open about a month ago,” Fiechter said. “I knew she’d come out firing, I definitely had a slow start and she was playing well and everything seemed to be running away from me. I told myself to try and relax and keep retrieving balls and my goal in the match was to just get in front as much as possible and volley and I think I got better as the match went on. I’m at a loss for words.”

Like her breakthrough semifinal at the U.S. Open in October, Fiechter will now take on world No. 1 and top seed Nouran Gohar, who has yet to drop a game in Grand Central with a three-game quarterfinal win against eight seed Hollie Naughton.

“Fortunately with my sports psychologist, Danny Massaro, we’ve been working on trying to stay positive and predict positive things, even in moments where things are running away from me and I’m feeling that I’m not hitting my targets, I can turn it around and play the match of my life,” Fiechter added. “I’m not sure it was tonight but I’m just relieved that I could find a way through. It’s so hard to believe, when I’ve played this event in the past I’ve barely made the draw and just to be able to play on this court and to be able to come out and play again tomorrow and to try and book my place in the final is just incredible.” 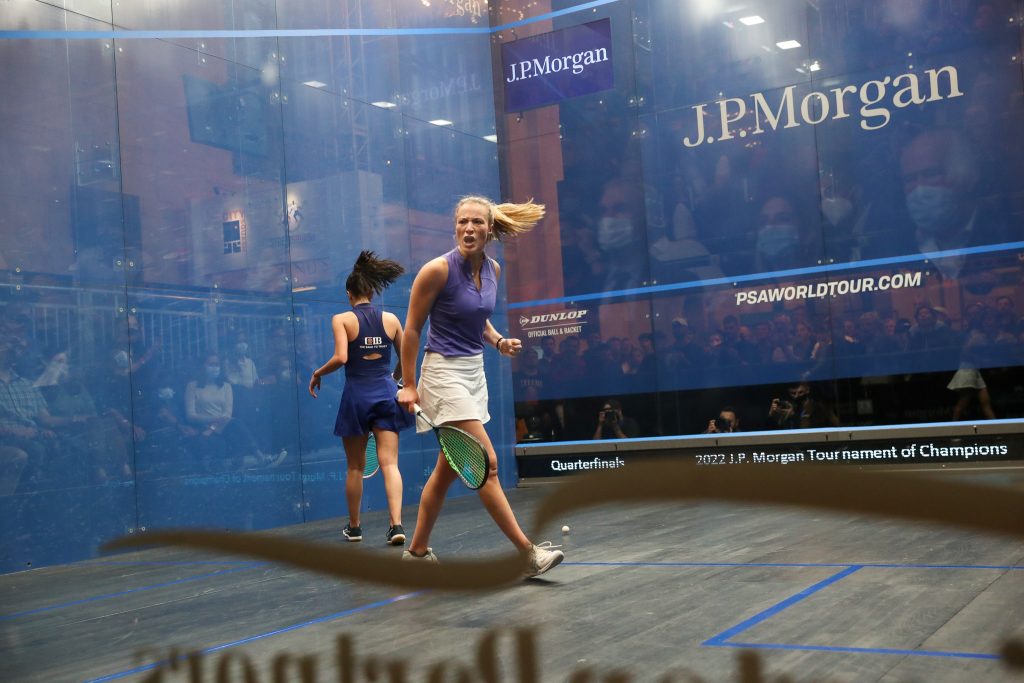 The ToC Will feature two Americans in the semifinals for the first time in tournament history after world No. 4 and two seed Amanda Sobhy reached her second semi in Grand Central with a three-game win over Egypt’s world No. 16 Nada Abbas. Sobhy will face three seed Salma Hany Friday, who defeated U.S. teammate Olivia Blatchford Clyne in the opening match of the day.

“It’s a privilege to play here,” Sobhy said.“I love playing on home soil in front of the New York crowd, they are amazing. I want to enjoy every moment that I can here, it’s been two and a half years [since the last ToC], so I don’t want to wait any longer for the next time the ToC happens. I want to enjoy this moment and be out there as long as I can, except for when I’m actually playing because I’d like to win as quick as possible.”

On the men’s side, Ghosal and Ibrahim put on a show for the late night crowd in Grand Central with a seventy-two-minute marathon that saw the thirty-five-year-old come back from 2-1 down and to defeat the Princeton senior thirteen years his junior 11-8, 7-11, 9-11, 11-6, 11-9.

“It means so much, this is my 11th time here and I hadn’t gotten this far,” Ghosal said. “I’ve been putting a lot of work in and it’s good to see it come to fruition. For it to come fruition at somewhere like Grand Central Terminal is brilliant, I’m super happy. I don’t think you can call Youssef an up-and-coming player anymore, he’s chopping people that are much higher up. He’s playing at such a high level, it’s so difficult to play him. I had to be super disciplined in my head to execute the plan that David Palmer, who has been coaching me, had put together. He’s going to be around for a really long time entertaining a lot of people around the world. I’m just glad that today we had such a good match and hopefully we can have a few more before I walk into the sunset.”

Ghosal will vie for a spot in the ToC final against Peru’s world No. 5 Diego Elias, who dispatched four seed Gregoire March in four games and forty-nine minutes.

The top half of the men’s draw features two in-form Egyptian in top seed Ali Farag, who defeated 2015 semifinalist Miguel Rodriguez in three, and Mazen Hesham who will make his semifinal debut after ending Harvard senior Victor Crouin’s impressive run in four games.

“I’ve been dreaming of playing in the later stages of this event, I actually only won my first match on this court a few days ago and it’s not because I’m a bad player,” said Hesham, the new world No. 8. “I’ve had some injuries but hopefully, it can happen more from now on. But it feels amazing to be able to compete against these top guys everywhere in the world, not just here.”