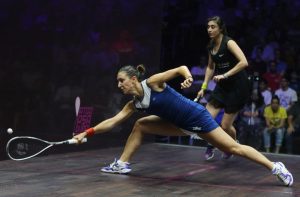 [Above: Camille Serme of France returns a shot from Nour El Sherbini of Egypt, during the Dubai World Series. (image: Associated Press)]

Each day, an estimated 200,000 people walk through Grand Central Terminal’s Vanderbilt Hall in midtown Manhattan. They pass by on their way to catch a train or subway or visit the historic landmark.

This week, they have been greeted with an unusual sight: the world’s best squash players competing on a glass-enclosed court.

For the 22nd consecutive year, Grand Central is hosting the J.P. Morgan Tournament of Champions (ToC), one of the most prestigious events on the Professional Squash Association World Tour.

The nine-day tournament concludes tonight at 7:00 p.m. with the women’s final between No. 2 seed Nour El Sherbini of Egypt and No. 5 seed Camille Serme of France, followed by the men’s final pitting two Egyptians against each other: No. 2 seed Mohamed ElShorbagy and No. 4 seed Tarek Momen.

As usual, almost all of the world’s top players participated in the ToC, which is one of seven “platinum” events on the PSA World Tour, signifying they are the most important tournaments with the biggest purses. The ToC has $390,000 in prize money, with $195,000 apiece for the men and women.

The event’s roots go back to 1930 when club professionals in the United States played against each other. It changed its name to the World Professional Squash Championships in the late 1970s and to the ToC in 1992. That same year, John Nimick, a former professional squash player, became the PSA’s executive director and oversaw the tour.

When Nimick took over, the ToC was held at the Winter Garden Atrium at the World Financial Center office complex in Manhattan. The space had 16 palm trees in the middle, which made it difficult for the tournament organizers to put the court there and have an ideal spectator experience. In 1995, the event moved to Grand Central’s Vanderbilt Hall.

“When a friend said, ‘Hey, have you seen this space up in Grand Central?,’ I went up and walked into it and I knew immediately this would be the best place to run a pro squash tournament,” Nimick said.

Still, the 1996 ToC was held at the Heights Casino, a squash club in Brooklyn, because Vanderbilt Hall was closed for renovations. The ToC went on hiatus in 1997 and 1998, at Nimick’s behest, due to the hall still being closed.

“I decided instead of trying to find another second-tier place to run it for two years that we would just shut it down because we knew we were going to hold it back in Grand Central in 1999,” Nimick said.

Indeed, Vanderbilt Hall was open again in time for the 1999 ToC, and the event has been there ever since. Around that time, Nimick struck a deal with the PSA in which he paid the organization a rights fee to run the tournament. Within three years, he had formed a company that took ownership of the event.

For the past 20 years, Nimick’s company has run, marketed and operated events in numerous genres, including tennis, golf and even classical music. But since 2013, the company has focused exclusively on squash. It owns and operates another PSA tournament, the Oracle NetSuite Squash Open, which takes place next to the Embarcadero Center in San Francisco each September.

Still, the ToC holds a special place in Nimick’s heart. Nimick, a former All-American at Princeton University, played in the ToC when it was known as the World Professional Squash Championships. And he’s been the driving force behind the event’s growth and unique location.

Vanderbilt Hall, which is near Grand Central’s main entrance at East 42nd Street and Park Avenue, used to be a waiting room for people preparing to board their trains. But for the past couple of decades, the 12,000-square-foot room has served as a space to hold events and gatherings. In 2016, restaurateur Claus Meyer leased half of Vanderbilt Hall and opened the Great Northern Food Hall. These days, Meyer serves as the caterer and his restaurants/food courts serve as the hospitality area for the ToC.

As part of the agreement with the Metropolitan Transit Authority, which owns Grand Central, Nimick’s company leases half of Vanderbilt Hall, builds out the infrastructure such as the grandstands and squash court and pays for the electricity and insurance. The company also puts up the prize money and gets hotel rooms for players. All told, Nimick said the budget for the tournament is more than $1.7 million.

The glass-enclosed court at Vanderbit Hall has stands on three sides, and the organizers sell 450 tickets for those seats. But there are no seats on the fourth side, so people can stop by and watch the matches for free.

Due to the 48-person draws for the men’s and women’s fields, some of the early round matches are held at other Manhattan venues (the Harvard Club, Princeton Club, River Club and New York Athletic Club) because there’s only enough room for one court at Grand Central. Still, all of the Round of 16, quarterfinal, semifinal and final matches are at Grand Central.

Nimick, 61, is planning on holding the ToC at Grand Central for as long as possible, but he’s looking to expand. He would love to have a second glass court at the 67-story One Vanderbilt office building that SL Green Realty Corp. is developing next to Grand Central. The property is expected to open in August. Another option could be the 70-story building that J.P. Morgan is constructing at 270 Park Ave., which is four blocks from Grand Central. That project, which includes demolishing the existing building at the site and constructing a new property, isn’t scheduled to open until 2024.

Both buildings are expected to have large atriums and public spaces, where Nimick envisions large crowds gathering to watch the world’s best squash players, just like they do at Grand Central. He’s always thinking of ways to grow the ToC and make it even more appealing to players, fans and sponsors alike.

“I’m passionate about the event,” Nimick said. “I don’t know when you predict when you’re going to stop or how you’re going to transition it to the next ownership group or sell it, but I don’t plan on doing any of those things for at least 10 years.”