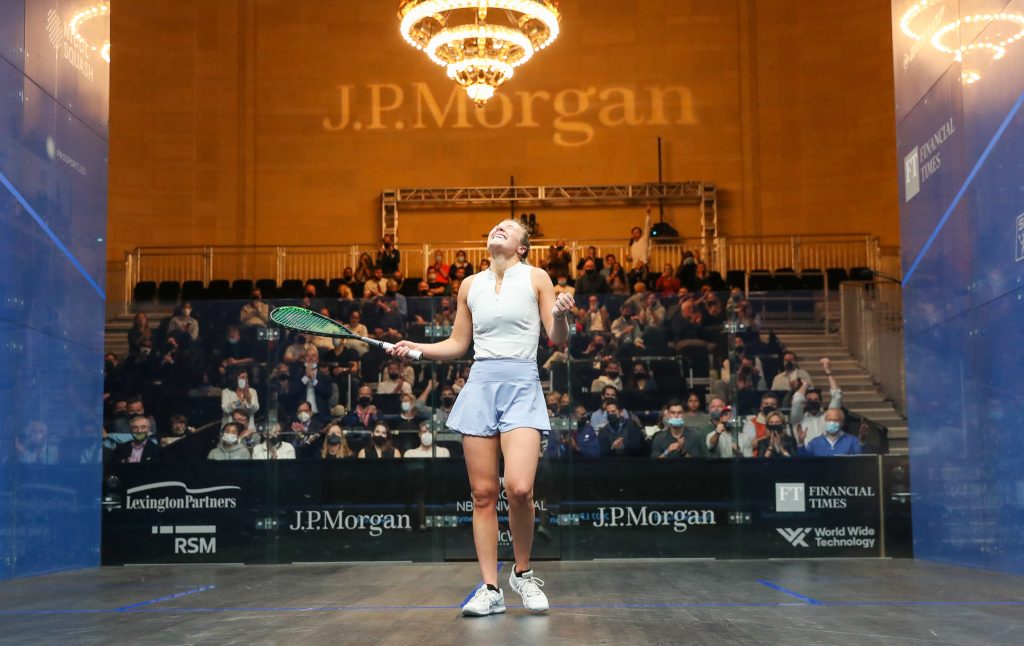 The J.P. Morgan Tournament of Champions will have three Americans in the quarterfinals for the first time in tournament history after Olivia Blatchford Clyne and Olivia Fiechter joined Amanda Sobhy in the last eight after round of sixteen wins Wednesday, May 4, at New York City’s Grand Central Station.

One theme throughout the day was the realization of the childhood dreams of playing a squash icon or experiencing that winning feeling for the first time in Grand Central.

Making her tenth tournament appearance, Brooklyn-born Olivia Blatchford Clyne opened up the day’s matches against France’s world No. 30 Melissa Alves. The Penn graduate started on the front foot taking a 7-1 lead in the first game, but the American rebounded to take the first game 12-10 and kept her momentum in the second to take it 11-6 and earn a 2-0 lead. Alves responded in the third 11-7, but Blatchford Clyne collected herself to close out the match 11-6 after forty-one minutes.

“Melissa is a class player and if you give a class player balls to take in, you’re going to get munched so if I could hang in and ride that storm then maybe I’d get something to play with and in the end I did,” Blatchford Clyne said.

The twenty-nine-year-old has been attending the ToC since she was a child and was inspired by the professionals she watched growing up to pursue her own professional career.

“It’s crazy, they awarded James Willstrop with a trophy for eighteen appearances but I think if you count attendances I think I’m on about 27, so I think I’ve got him beat,” Blatchford Clyne said. “It’s no joke when you say I grew up here, I literally grew up in those stands, I was inspired by all the squash I saw, I wanted to be one of the players and that dream has come true now, I am one. It’s surreal and special.”

The most dramatic match of the day came down between world No. 10 Olivia Fiechter and world No. 20 Sivasangari Subramaniam, a rematch from February’s Cincinnati Gaynor Cup, which the Princeton graduate won 11-9 in the fifth. Fiechter fought off an early lead in the first game to go up 1-0, but then the Cornell graduating senior started to find her form and took control of the match to win the second and third games 11-8, 11-6. A tight fourth game saw the Cornell graduate earn a match ball at 10-9, which she failed to capitalize on when a video review deemed a let as a no let. Fiechter won the next to points to force a fifth game, which she took full control of to win the match 11-5 after fifty-four minutes.

“The last time we played I think she had a few match balls in the fourth as well, so when you’ve done it before it definitely adds to that self belief in those hard and challenging moments,” Fiechter said. “She’s such an incredible player, she was pounding the ball so severely and for a while I was just trying to weather the storm. I have so much respect for her, she’s playing at Cornell while playing on the tour and I couldn’t have done that when I was at Princeton. Now she’s at her highest ranking of 20, so I’m at a loss that I was able to find a way to win, especially in front of this crowd.”

Since her last ToC appearance in January 2020, Fiechter has risen from world No. 33 to a new career high world No. 10. The result mark’s the five seed’s first career ToC win in her fifth appearance.

“There’s something magical about this court and it’s been a lifelong dream to play on here,” Fiechter said. “To do it in front of my family, friends and loved ones is extremely special. I never get to play in front of my parents and it’s my mom’s birthday week and mother’s day is coming up, so I’m going to dedicate this one to her I think. My coach Peter [Nicol] is in the crowd here and I remember getting his autograph when I was eight years old here, so to have him coaching me and playing on this court is incredible, this is definitely going to be one that I will never forget.” 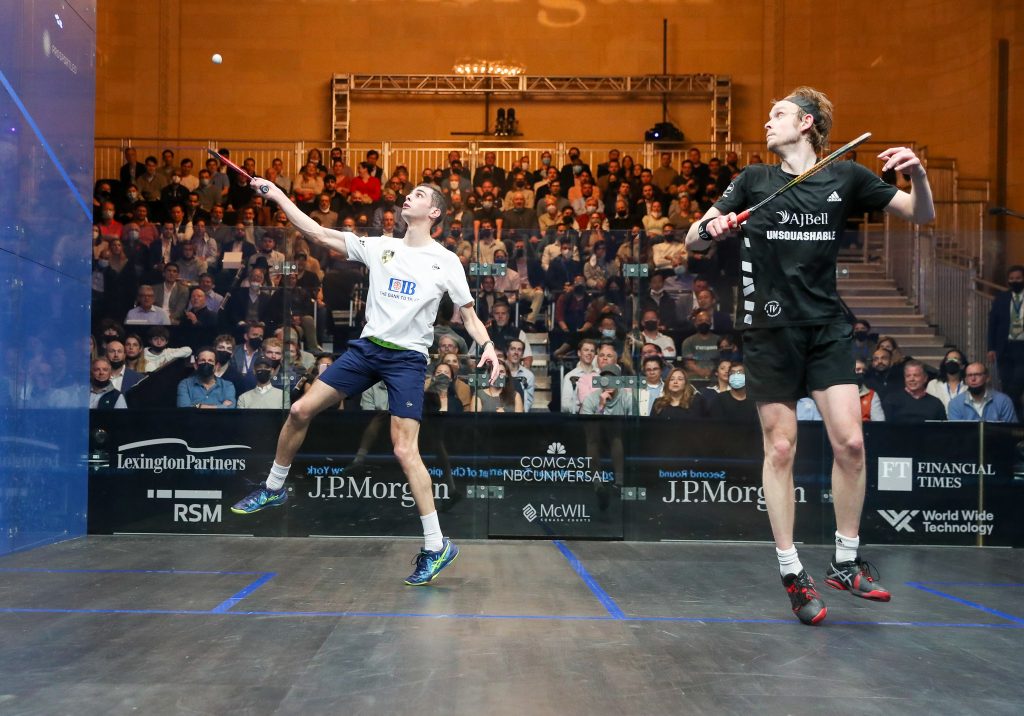 In the men’s draw, the four seeds in action all prevailed. Top seed and world No. 2 Ali Farag opened up his campaign with a blistering 3-0 win over 2010 ToC champion James Willstrop, who was recognized on court Monday night for his record-setting eighteenth ToC appearance.

“We don’t want him to retire any time soon, he’s such an asset to our sport,” Farag said. “I have a lot of respect for James and that’s why I played so well today. Usually, in the first round you start a little bit off, but you can’t afford to do that against someone of James’s caliber. When he was being introduced when we were warming up, I was thinking that I was watching James here either live or behind a screen in Egypt and I dreamed of being on this court one day, let alone with him. This is the second time we’ve shared this court, and as James mentioned, it’s the most spectacular court that you can play a sport on, not only squash.”

Colombia’s Miguel Angel Rodriguez is one of the few players who may match Willstrop’s ToC appearance record, marking his fifteenth with an opening win over France’s August Dussourd in four games.

“This is my 15th time at the TOC, I’m very glad and happy,” said the thirty-six-year-old. “I was so pumped for the match. I had to wait three days, I’m feeling great, this year has been amazing for me, very busy and I have accomplished many goals in this period so I’m just grateful for the opportunity to be here and win again.”

For all results, more information and tickets visit tocsquash.com.