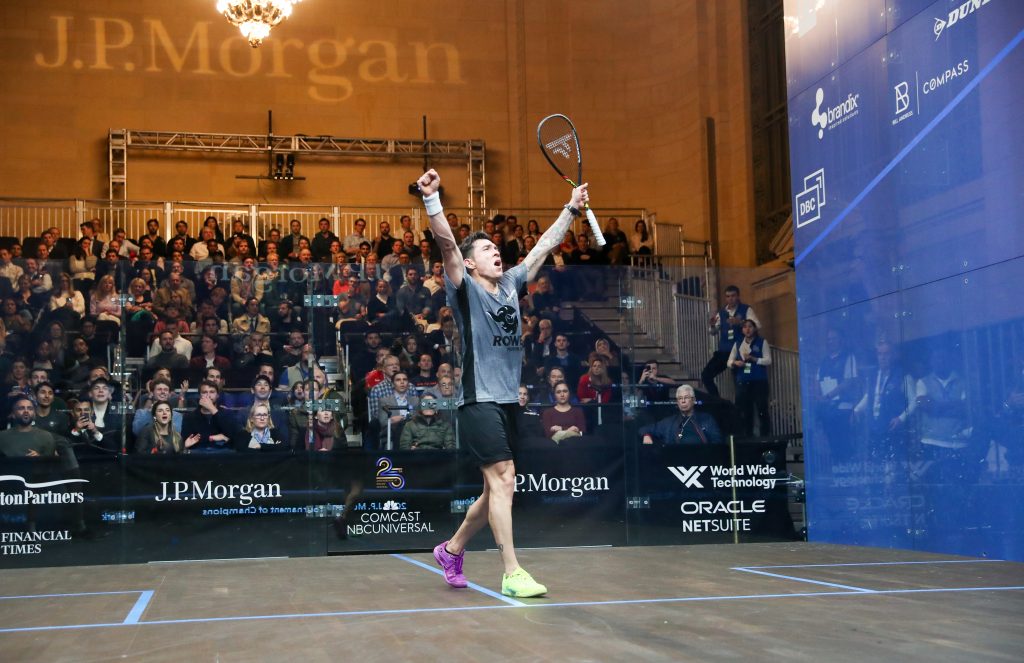 Thirty-seven-year-old Miguel Angel Rodriguez resurrected the same form that saw him reach the 2015 ToC semifinals, dispatching world No. 3 Mohamed ElShorbagy in the biggest upset of the tournament so far Thursday, January 19, at Grand Central Terminal.

Directly following the presentation of a proclamation from New York City Mayor Eric Adams recognizing the ToC’s “skilled squash players from around the world” who “showcase their impressive abilities, while fostering a cultural exchange between participants and spectators alike, who are united by their enthusiasm for this fast-moving racket sport,” Rodriguez and ElShorbagy put on a performance of that very spirit.

Eager to reclaim the world No. 1 ranking and earn his fourth ToC title, ElShorbagy came out of the gates strong and took the first game 11-6. The Colombian Cannonball started to find his form in the second game and won a crucial tie break 12-10 to level the game score. With the crowd starting to turn in his favor, Rodriguez won a close third 11-9 and held a steady lead in the fourth to win 11-9, 11-5 in fifty-two minutes. The result marked Rodriguez’s third career win against the Englishman in their twentieth encounter.

“I came without pressure, of course, I was expecting a tough match and, you know, playing Ali Farag, Tarek Momen, the top five guys, it’s always very tough, especially in the first rounds like, I mean, the first match,” Rodriguez said. “But overall, I think I played very smooth today. I was just trying not to play the same way I play. You know, every time, like defending and maybe waiting for mistakes. My strategy was to keep more like at the back, at the corners and maybe when I had like a loose ball going for the shots and still doing my trick shots and everything went well and yeah, I feel very smooth without tension, because usually those kind of matches, it gives you a lot of tension in your body and you start to worry too much about what’s going to happen or what’s happening during the match.”

While the Colombian pulled off the biggest upset of the first two days of play, numerous seeds and higher-ranked players narrowly survived close encounters.

New Zealand’s four seed Joelle King held off a five-game comeback from Wales’ Emily Whitlock in Grand Central, while England’s eight seed Sarah-Jane Perry came back from 2-1 down against Egypt’s world No. 14 Salma Hany to win in five at the Harvard Club. 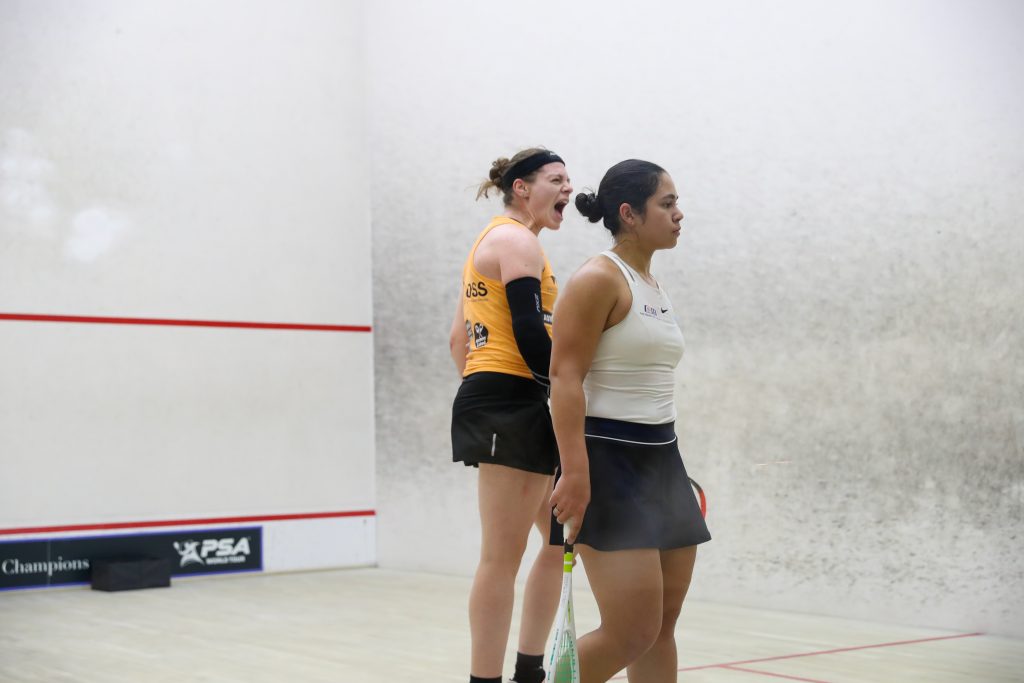 “A really tough one there, coming back from 2-1 down against any player is really difficult. But especially against someone like Salma with the quality that she possesses and the skills that she has,” Perry said. “A couple of those games there, I was really getting done because I was leaving the ball loose. So I had to really just knuckle down, focus on my length, then my shots and then look for the opportunities to attack. Thankfully, I just managed to go up a few gears and the start of the fifth and I could sort of sense she was a bit tired so I wanted to take advantage of that. I was really pleased with the fifth game particularly.”

After reaching the quarterfinals in his ToC debut last May, France’s world No. 10 Victor Crouin advanced in five games, 11-9 in the fifth against the young Englishman Nick Wall.

Thirty-three-year-old Nicholas Mueller has been in the some of the best form of his career this season with a career high ranking of world No. 13, and backed it up with a sparkling five-game win over the tenacious world No. 11 Joel Makin in the first men’s match on the glass court.

Friday will see the second half of the second round play out on the glass court and at Nicol Squash and New York Athletic Club with matches starting from 12pm.