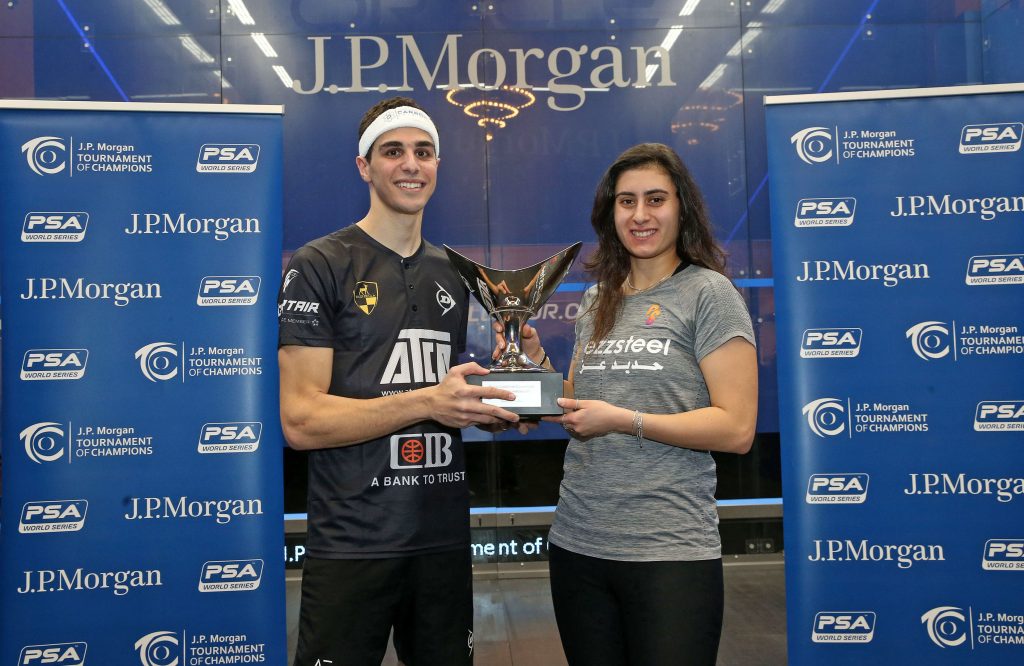 The finals marked the twenty-second year that the ToC has been hosted inside of the iconic Vanderbilt Hall, and appropriately fielded both the men’s and women’s world No. 1’s and No. 2’s against each other with both No. 2’s prevailing.

The finals played out in contrasting fashion as El Sherbini, world No. 2, claimed the title in three games against Raneem El Welily and Ali Farag mounting a five-game comeback from 6-3 down in the third game to win his first ToC title in five games.

The women’s final saw a close first game with both players within reach of each other, until El Sherbini fired off three winners to earn three game balls up 10-7. El Welily fought off two game balls using her expert retrieval and an emphatic winner to go within a point at 10-9, at which point El Welily succumbed to and error to give El Sherbini a 1-0 lead.

El Sherbini continued to push in the second game, maintaining a lead over El Welily for the duration, hitting winners and forcing more errors from her counterpart on her way to taking the second 11-8. El Sherbini led throughout the third, earning her first championship ball on a back corner nick, and converting on her first opportunity after thirty-eight minutes.

“This is my lucky place, this tournament was my first ever platinum win and now it’s the first one I’ve won three times,” El Sherbini said. “It’s really big to put my name on this trophy and to win this tournament, but to win it three times is something that I will never forget in my life.”

El Welily had just dethroned El Sherbini to claim the world No. 1 ranking in December after twenty-three-year-old spent nearly three years on top of the world’s rankings.

“We’ve been battling against each other for so long, the head-to-head is 10-10, so that shows how tough it’s been. We’ve been battling in a lot of finals, sometimes it goes my way, sometimes it goes her way. At the end of the day, the better player is going to win, and I think I was better than her today. Maybe she was suffering after yesterday’s match, but I’m going to take the win and I’m going to look forward to the next one.”

The ensuing men’s final marked the seventh career PSA World Tour final match up between Farag and ElShorbagy, with ElShorbagy winning four out of their six previous match ups, and both of Farag’s wins occurring on U.S. soil at the 2018 Oracle NetSuite Open and 2017 U.S. Open.

The world No. 1 appeared to be on track for a fifth win against the Harvard Graduate, pulling out a tight first game—including a mammoth two-minute rally at 10-10—to go 1-0 up. In the second, a string of Farag errors saw ElShorbagy pull away from 6-5 to win the second 11-6. The match turned on its head in the third game, however, when Farag found himself 6-2 down, and went on to win the next nine points through winners and ElShorbagy errors. The fourth game proved to be the quickest of the match as a startled ElShorbagy quickly fell 11-3 and took a self-inflicted injury break between games as a medical team examined his calf.

Despite any physical discomfort, ElShorbagy returned to court and pushed Farag in an entertaining climax of the tournament. At 8-all, Farag hit a nick off a return of serve to the thrill of the crowd. Match ball up, Farag caught ElShorbagy in the front of the court to earn a stroke call on match point.

“It’s been a dream of mine since a very young age to reach that No.1 spot,” said Farag afterwards. “To do it in such a fashion in front of so many greats of the game, in front of the love of my life and my parents watching at home, it couldn’t get any better really… It was very emotional. Mohamed is such a warrior, he never gives any points away. It’s been one of the biggest spectacles for the sport, and to be played in such a clean spirit is a great showcase for our sport.”