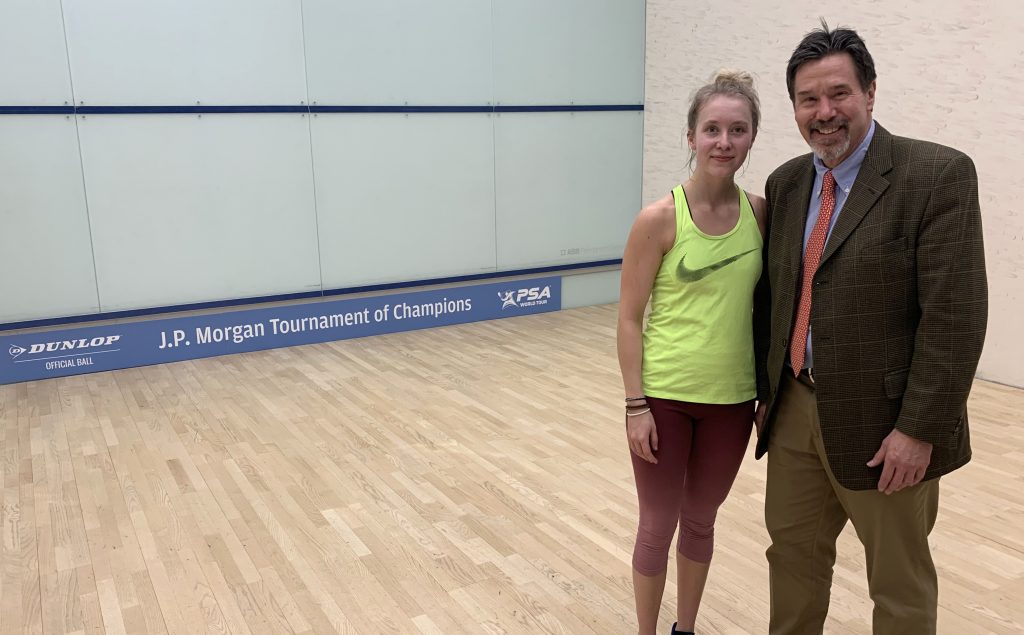 The Finnish international’s shot-making was in fine form in the first game, where Soini sped to an 11-5 advantage. Soini earned a 6-2 lead in the second game, but Bunyan fought back to level the score at 9-all, at which point Soini edged the game 11-9 to go up 2-0.

Bunyan, a Princeton graduate, bounced back in the the third game, pulling away from 8-all to earn the game 11-9. Soini appeared to be on the brink of swiftly clinching the match in the fourth, up 8-2, but the Canadian came back to fight off two match balls—nearly forcing a tie-breaker at 10-9when Soini slotted a precise backhand winner to clinch the match 11-9 after thirty-four minutes.

“We played last season in the New York pro league and I lost in five, so I knew I had a chance, but at the same time I knew it wasn’t going to be easy,” Soini said. “I was happy to get the lead and keep it. Sometimes when I get ahead, I’ll get nervous and let it slip. I had a tough loss in December at home in Finland; I was up 2-1 against the No. 1 seed and 10-8 up in the fourth, and then I lost the match. So up 10-7 in the fourth here, I was telling myself ‘not this time.”

Soini—a native of Espoo, Finland, and three-time Finnish national champion—has been based in New York City for four years as a teaching and touring professional. The twenty-three-year-old was ranked as high as world No. 66 in 2017.

“It basically feels like I’m playing at home,” Soini said. “For the last few years I’ve been watching all of the ToC matches on SquashTV or in person. I took a picture of the glass court and made it my phone’s wallpaper, which always reminds me that it’s the goal and the dream to play in the main draw of this tournament. Special thanks to my coach Wael El Hindi, I wouldn’t even be in this playoff if it wasn’t for him.”

Soini will face Egypt’s world No. 17 Hania El Hamammy at New York Athletic Club in the first round Friday, January 18, at 7pm local time. Soini, world No. 85, previously competed in ToC qualifying once in 2017, where El Hamammy defeated her in three games.

“Hania’s a good friend of mine,” Soini said. “I helped her when she played the Carol Weymuller in Brooklyn. Last time I was helping her, but now I’m trying to beat her.”