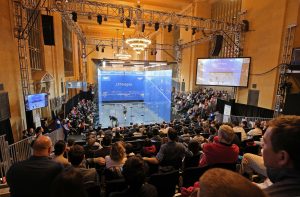 The global COVID-19 pandemic resulted in the cancellation of the 2021 J.P. Morgan Tournament of Champions, which was the first time since 1998 – during the renovation of Grand Central Terminal – the event had not gone ahead.

However, following the renewal of a new three-year title sponsorship with J.P. Morgan – which will commence at the 2022 edition of the PSA World Tour Platinum tournament – the world’s best squash players will once again compete under the chandeliers of Grand Central Terminal’s stunning Vanderbilt Hall next year for the honour of becoming the ‘ToC’ champion.

“I’d like to thank J.P. Morgan for their unwavering support and commitment to the Tournament of Champions during these unprecedented times, and I look forward to welcoming these world-class athletes back to Grand Central Terminal for what promises to be an enthralling week of action,” said Tournament Promoter and Squash Engine Inc. President, John Nimick.

“The decision not to hold the 2021 edition of our tournament was a difficult one, but rendered necessary by the COVID-19 pandemic, which made holding a top tier event in a commuter station untenable.

“However, I’m sure the 2022 instalment of the J.P. Morgan Tournament of Champions will be the most captivating yet, and I hope the 24th edition of the ToC at Grand Central plays a part in the return of New York City as the greatest city in the world.”

Squash fans can watch the event on the PSA World Tour and ToC Facebook channels or the PSA SQUASHTV YouTube channel.