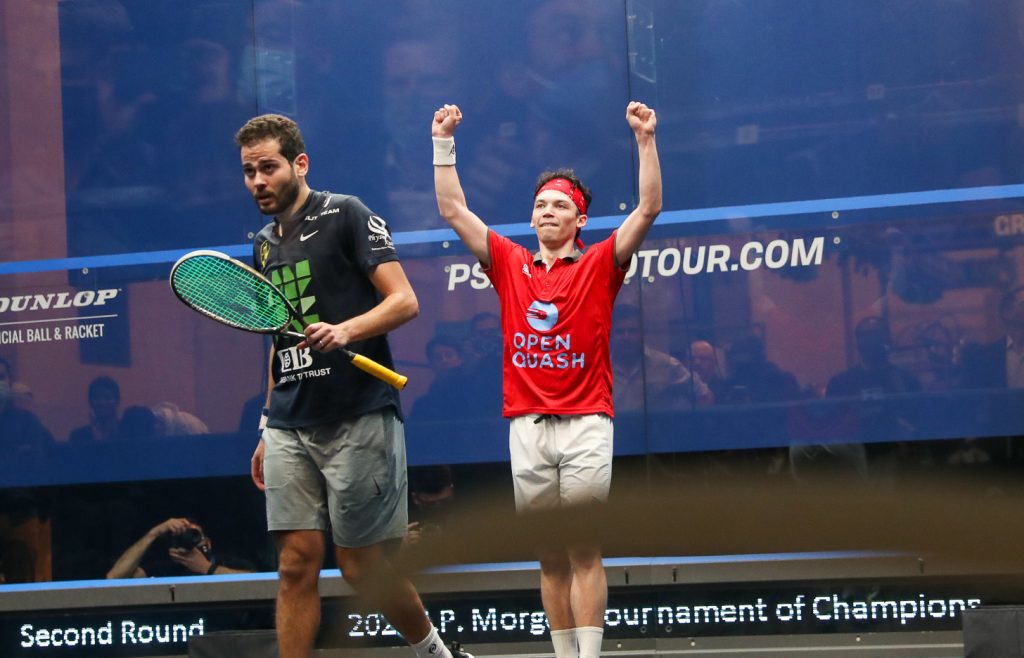 Graduating Harvard Senior Victor Crouin pulled off the biggest upsets of his burgeoning career by knocking out 2017 J.P. Morgan Tournament of Champions winner Karim Abdel Gawad in the second round, while world No. 8 Rowan Elaraby saved two match balls in the fifth game to survive a second round upset against Team USA’s Sabrina Sobhy Tuesday, May 3, in New York City’s Grand Central Terminal.

Gawad, the world No. 11, has earned a reputation for slow starts that culminate in lethal comebacks throughout his career and appeared to be on track to do just that against the young Frenchman, dropping the first game 11-4 then narrowly losing the second 13-11. In the third the Egyptian got back in the game 11-7. Crouin pressed on in the fourth, not letting Gawad find his stride and earning a match ball 10-9, which Gawad saved. Crouin collected himself and saw out the match 12-10 after sixty-four minutes.

“I’ve watched Karim for many years and I remember watching him at the World Championships in Egypt, where he nearly lost in the first round and then basically chopped everybody else,” Crouin said. “I knew it would be tough, I’ve never played against him and usually, when I play someone for the first time it takes me a few matches to get the right tactic and play my game. It’s hard to know what to do when you’re two up against Karim, you feel like you’re playing well and you want to play even better but after losing the third I tried to tell myself to not change anything and keep it on his backhand and play a three-quarter game and try to avoid that front left corner and every time I hit off the back wall it went over there and I thought ‘Damn you’re going to be in trouble’ and usually I was, but I was just trying to win one point at a time.”

Crouin will face the new world No. 8 and four seed, Mazen Hesham, in the third round Thursday after the Egyptian dispatched Team USA’s Shahjahan Khan in three games.

“Usually, my strength is my consistency, I’ve beaten almost all the players ranked below me and not beaten many people ranked above me,” Crouin said. “Like I beat Paul Coll and Gawad today but have lost to some up and coming players, but still ranked below me, so I’ve just been trying to figure out what’s going on, I need to keep winning those matches but also get my consistency back. I’m just starting my final exams, I have four essays due so I’m going to go back to my studies now.” 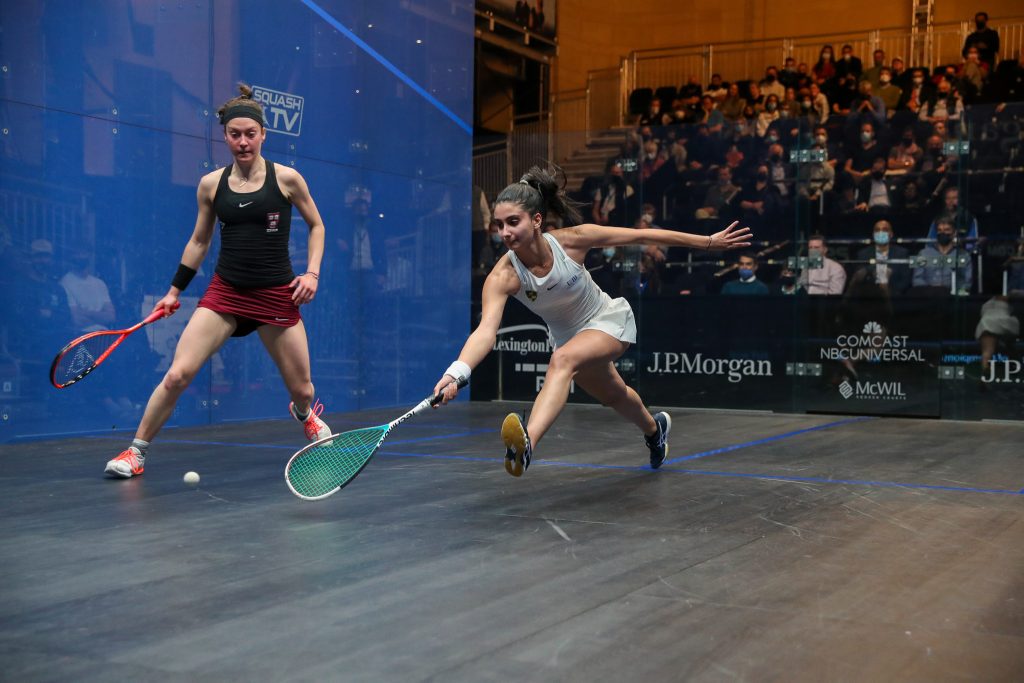 Team USA’s Sabrina Sobhy nearly pulled off the biggest upset of the day over forth-seeded Elaraby, who beat Sobhy on her way to winning the Carol Weymuller Open two weeks ago in Brooklyn. The match extended to five games and the American earned two match balls up 10-8, but Elaraby rattled off four straight points to win the match and avoid an early exit.

“That was brutal,” Elaraby said.. “I’m really glad I’m through. ‘Beans’ is a very tough opponent and playing her is always tough. We just played last month in the early rounds as well. I knew from the very beginning that it was going to be a tough one. She’s a really good friend of mine. I was in trouble [at 10-8 down] but I was trying not to hear the score and trying to play point by point and give it my all. Even if I had lost it, I would have still been proud because I feel I gave it my all.”

Wednesday will see the second half of the second round play out with matches starting from 12pm noon local time. For tickets and more information visit tocsquash.com.