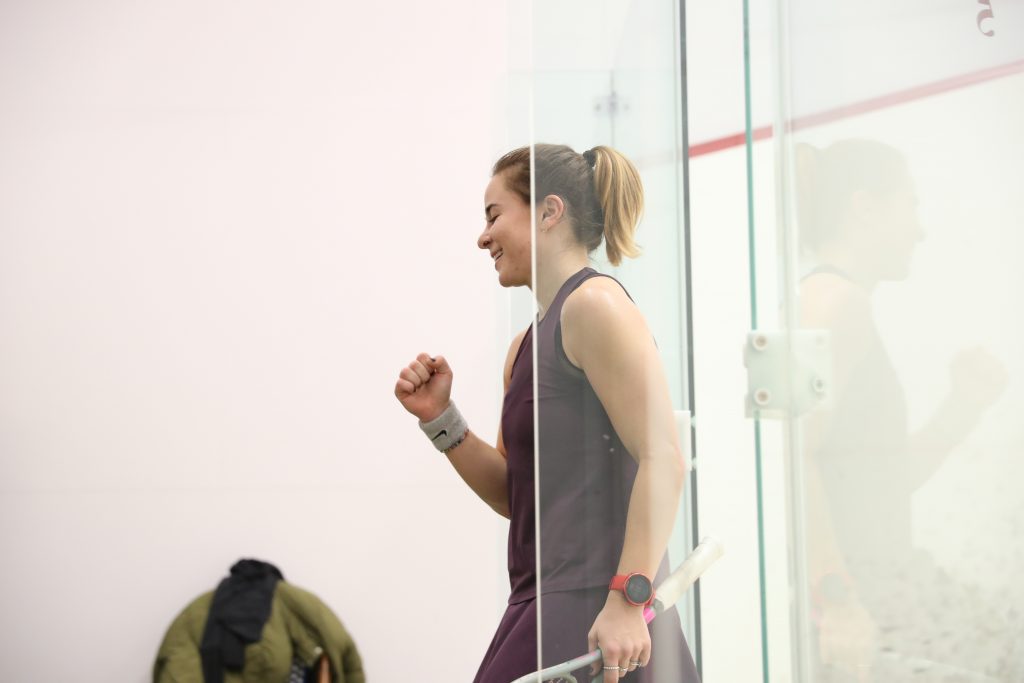 The J.P. Morgan Tournament of Champions Third Round will feature an all-American clash between Amanda Sobhy and Olivia Blatchford Clyne (above) after both players advanced in three games Friday, January 20, in New York City.

One month after making history for Team USA by recording a second place finish at the Women’s World Team Championship together, Sobhy and Blatchford Clyne will face each other in Grand Central Sunday evening.

Blatchford Clyne, world No. 20, produced one of two upsets at the New York Athletic Club with France’s Sebastien Bonmalais joining her in the third round after defeating Scotland’s Greg Lobban. Cheered on by a partial gallery, the American took out Canada’s world No. 17 Hollie Naughton in a comprehensive performance, 11-4, 11-9, 11-4 in twenty-seven minutes.

“I had a really good offseason and was due for a big result,” said Blatchford Clyne, who started playing squash at the Heights Casino in Brooklyn as a child. “I feel like all of the hard work paid off tonight and I was on top of my game. It was really special to do it in front of friends and family, and to have my US Squash support network here with Coach Beng Hee and Bridget. I’ve been coming to the ToC since 1999 and it’s definitely my favorite tournament. It’s a dream to play on the glass court in Grand Central and I couldn’t be more excited to get out there on the eve of my 30th birthday Sunday.”

Two matches proved to be standouts on the day, including the second match on the glass court between world No. 11 Georgina Kennedy–who won the Carol Weymuller Open last week in Brooklyn–and world No. 12 Tinne Gilis. The English international came back from 2-1 down to win 11-9, 9-11, 1-11, 11-7, 11-9 after sixty one minutes with the crowd deservingly giving both players a standing ovation for their heroics.

“Yeah, I’m really happy to win tha, I had a good week in Edinburgh and then went straight into the Carol Weymuller event in Brooklyn,” Kennedy said. “So I’ve had a good few matches and I came into this event really confident, but also came in knowing that I had a really tough draw. We trained together and we lived together in Nottingham, so we know each other very well. I think when I’m playing my friends, I just struggle to find that like tenacity that I need. That’s why in the fifth I started screaming a little bit. I felt like I needed to get a bit of fire in my belly because that’s when I play my best squash, when I’m really focused.”

Egypt’s world No. 12 Youssef Soliman and world No. 19 Youssef Ibrahim produced the longest match of the tournament thus far with Soliman grinding out a five-game win 11-7, 7-11, 11-5, 10-12, 11-7 in eighty-nine minutes at Nicol Squash. Egypt’s Mohamed Elsherbini also needed five games to get past Columbia graduate Ramit Tandon 12-10 in the fifth also at Nicol squash.

All remaining matches will take place on the glass court with the round of sixteen set to take place over the weekend with matches from 12pm noon.