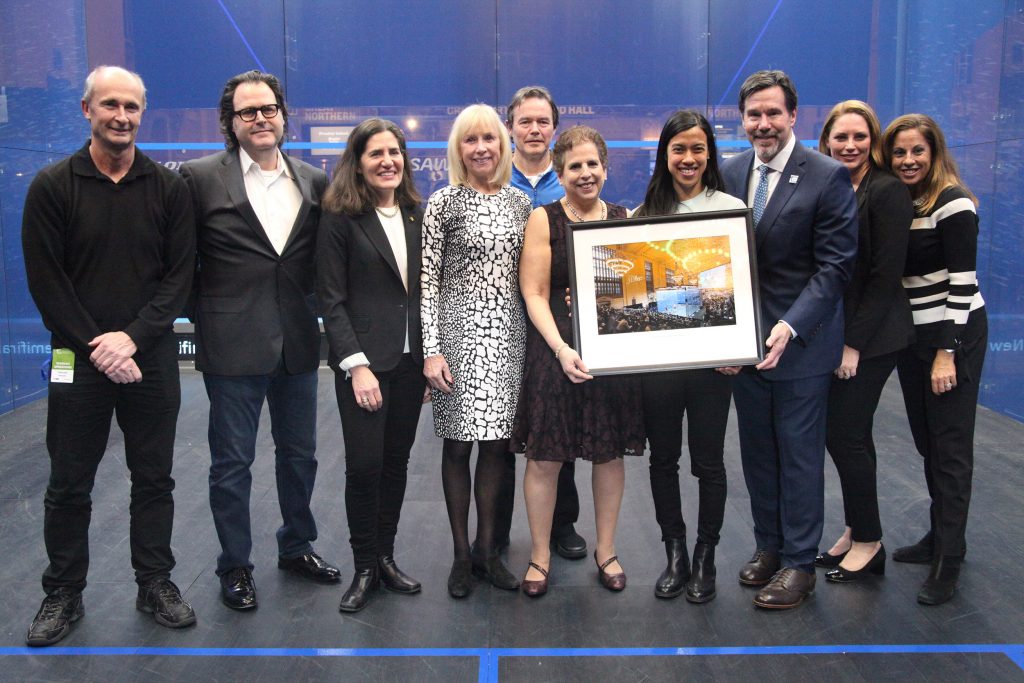 Beth Rasin was honored as the 2019 ToC Honorary Champion in front of a sold-out crowd in Grand Central Terminal Wednesday evening, January 23, recognizing her nineteen years of service to the tournament.

“Beth, you dedicated nineteen years of your time and energy to the Tournament of Champions,” said John Nimick, Tournament Director. “In those nineteen years we’ve tripled the size of the event. Your work has made an incredible mark on the Tournament of Champions, squash in the United States, and arguably the stature of this event world-wide. The players call it their favorite, we get the best crowds in the world, and you were fundamentally part of that process for nearly two decades. When I think of Beth, I think of two words: dedication and passion.”

Squash has been an essential part of Rasin’s life since college, where she played for the University of Virginia. In the 80’s and 90s, she was a nationally ranked A player and a member of the silver medal winning US Women’s Team at the 1997 Maccabiah Games. She also has a bronze medal in doubles from the 1997 World Masters. Rasin managed Team USA squads at world championships throughout 1990’s and handled media relations at the Pan American Games and served as President of New York Squash. Rasin produced the 2009 documentary on squash’s all-time great, Hashim Khan: “Keep Eye on Ball: The Hashim Khan Story.”

“Thank you everyone for this extraordinary honor,” Rasin said. “There are many things that define the Tournament of Champions, but for me, perhaps the singular distinguishing trademark of this event is the sense of community that we create every year, bringing together people from all walks of life who have a passion for squash, to share their joy and excitement of being here to watch all the world’s best players. From the elite athletes, to the urban squash participants, the titans of industry, the artists, writers, doctors–as well as the heart of New York Squash. We bring together all of these people where any type of boundaries that may have separated them are erased, and we are all together as one to share a passion that we love. I’ve met the most amazing people and made the best friends in my four four decades of playing squash, and for me that is the most profound reward of all.”

Rasin is the third person recognized as a ToC Honorary Champion, after Brent Nicklas in 2017 and Jack Herrick last year.