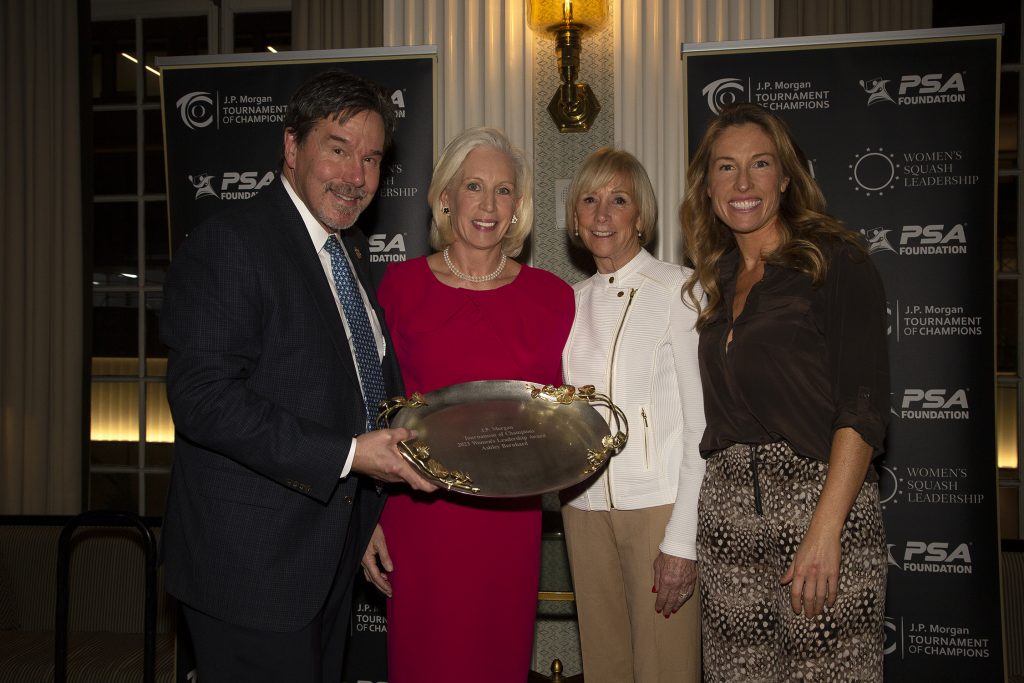 The Yale Club of New York hosted the gala event in its second-floor ballroom overlooking Grand Central Terminal. Thronging the crowd were numerous leaders, officials and even ToC stars past and present including Raneem El Welily, Peter Nicol, Sarah-Jane Perry and Camile Serme. Will Carlin, as master of ceremonies, welcomed everyone to the event and outlined its history as a small luncheon held courtside in Grand Central’s Vanderbilt Hall that evoled into a luncheon at the Yale Club and now an elegant cocktail reception before the evening’s ToC matches.

Two co-chairs of the Women’s Leadership Program, Jess Winstanley and John Nimick, spoke. Winstanley talked about how the Tournament of Champions is “an unforgettable annual bookmark” for all squash fans. Nimick noted the role Bernhard played in starting the Women’s Leadership Program and guiding the ToC towards full parity with women and men. “This year,” Nimick concluded, “there are more women’s matches on the glass court in Grand Central than men.”

Narelle Tippett Krizek, the director of women and girls squash at US Squash, fondly reminisced about the two legendary women in Australia who mentored her as a girl, Heather McKay and Di Davis. She explained that the money raised at the program went to the PSA Foundation, which was fostering a new initiative, the Women’s Leadership Coaching Fund, to grow the number of women coaches.

Ambassador Isabelle Picco addressed the crowd. The permanent representative of Monaco to the United Nations, Picco spoke about the power of sports to erase stereotypes. “Ashley Bernard is a constant inspiration to all of us,” she said.

Bernard then accepted her award. She told the story of how she originally got involved with the push towards parity: she took her young son to a ToC match a dozen years ago, and he asked her why the women players were getting paid less than the men. “Parity,” she said, “was the right thing to do and also the smart thing to do. It made all parts of the game of squash stronger.”

Bernard is a longtime member of the board of the PSA, including serving as deputy chair. She played a central role in achieving prize-money parity at all major PSA events and the merger of the men’s and women’s pro tours, both of which are considered significant milestones for pro sports. A founder and CEO of Haven Hill, which consults for organizations looking to focus on equality, leadership and empowerment, she is widely recognized as a global leader in the pursuit of equal status for women in sports, business and life.